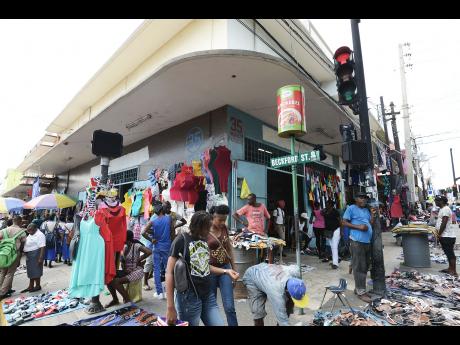 Ricardo Makyn
The property at 35 West Parade in downtown Kingston, which came under probe by the Office of the Contractor General, questioning the 2011 sale to Gassan Azan-led Bascho Trading Company Limited.

Contractor General Dirk Harrison has once again urged the Government to ensure appointees to public boards are "fully aware" of their obligations. His concerns come against the background of the 2011 Urban Development Corporation (UDC) $31-million sale of a Kingston property that he said was "tainted with irregularities and breaches".

Harrison made the recommendation in a report that was tabled on Wednesday in the House of Representatives. The report followed a probe into the sale of 35 West Parade, Kingston, to the Gassan Azan-led Bascho Trading Company Limited.

The investigation was initiated in October 2011, after a complaint from the law firm Hart Muirhead Fatta that was representing Michael Mahfood, a tenant on the property.

In his report, Harrison saved much criticism for the role the then general manager of UDC, Joy Douglas, had in a process that it said did not use public advertisement or acknowledged competing offers.

Noting that the UDC "failed to comply" with the directives of the then Government of Jamaica Privatisation and Procedures Policy, the contractor general said the agency's action was "tantamount to a disregard" of policies to facilitate transparent and economic efficiency in divesting government assets.

He further said, "In particular, the role played by Joy Douglas in secreting information from the corporation's board regarding the other competing offers" is "tantamount to an unfair undertaking."

Three offers were made before the submission and acceptance of the one from Bascho on February 15, 2011.

UDC unable to provide evidence to back up claim - OCG

According to Contractor General Dirk Harrison, the Urban Development Corporation (UDC) was unable to provide any evidence to back up a claim by Joy Douglas that there was a revision to the agency's market area plan. Douglas was general manager of UDC during the questionable sale of a property at 35 West Parade, Kingston, to the Gassan Azan-led Bascho Trading Company Limited in 2011.

The UDC had contended that the area in which the property is located was zoned for special purposes.

Meanwhile, the contractor general said a meeting facilitated with Azan in January, a month before the property was sold to him, was "dubious to say the least" because Douglas nor the chief architect Patrick Stanigar "could account for the discussions Azan said took place".

"The UDC board acted with unnecessary haste, irresponsibly and contrary to stipulated protocols," stated a report that was tabled in the House of Representatives on Wednesday.

For all those reasons, Harrison recommended that persons being appointed to boards are "fully" made aware of their obligations under the law. He commended the Government for developing a new policy for the divestment of Government-owned lands (2015), adding that to recover from the "blunders" ensures it follows the guidelines.

It was also his "strong" recommendation that the UDC develops operational mechanisms for enforcement of its policies. Along with that is a recommendation for the UDC to review its land divestment policies.

The UDC is yet to comment on the contractor general's report.

Wayne Chen, the UDC chairman at the time of the sale, said he had not yet gone through the report.

Azan is yet to respond to a Gleaner request for a comment.