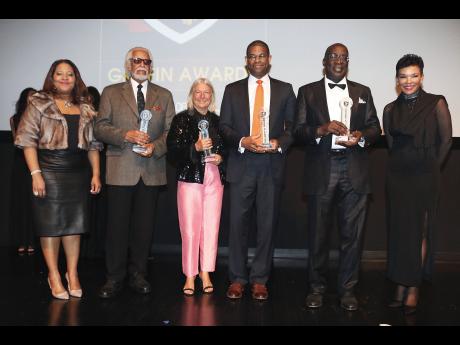 Education Minister Ruel Reid has come in for high praise from Audrey Marks, Jamaica's ambassador to the United States, for his commitment of $50 million towards the development of a robotics programme in Jamaica's high schools.

Marks said that the financial commitment by the education minister will strengthen the opportunities for Jamaican students to join their international counterparts in being on the cutting edge of technological development.

"The work of JCOBA, along with the Union of Jamaica Alumni Association, to strengthen and increase awareness about science, technology, engineering and math (STEM) in the schools across Jamaica and through the expansion of the robotics programme, underscores the importance of STEM to Jamaica's development agenda," she said.

MAN OF THE DECADE IN EDUCATION

At the function, Reid was honoured with the Man of the Decade in Education Award. Film-maker Perry Henzell (posthumously) and Winston Stona received the distinguished alumni awards in arts and contemporary leadership for their respective roles in the film The Harder They Come. Andrew Ewan was recognised for technology innovation.

Marks said the Golden Griffin Society must be honoured for its work over the last eight years, from when they first entered a competition, where the robot would not start to where they now stand, having trained more than 1,200 boys, copping six international awards and three world championships.

"I commend the significant milestones of the signature robotics programme, which has already been implemented at Jamaica College, and your commitment to supporting STEM training and skills of our young men," the ambassador stated.