Cooling down - Number of children killed in fires declining 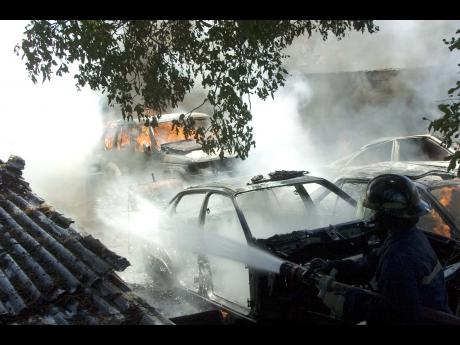 Omarie Morgan
A fire fighter puts out a blaze allegedly started by a five-year-old boy in a garage in downtown Kingston two Saturdays ago. 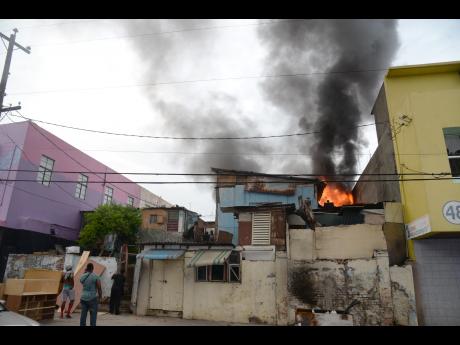 Jermaine Barnaby
Investigators are yet to determine the cause of this blaze on Church Street in downtown Kingston last Friday.
1
2

The number of children who perish in fires locally is at its lowest in more than a decade, and the Jamaica Fire Brigade is praising a nationwide school initiative, hours of community engagement and parents who rivet fire safety into the minds of the youngsters.

According to the Jamaica Fire Brigade, four children died in fires in Jamaica in 2016, the lowest since 2005, when eight children perished in fires.

This represented a welcome change from the worst year in the decade, 2009, when 19 children lost their lives in fires across the island, and 2006 when 18 died.

So far this year, no children have lost their lives in fires but still the fire brigade is asking for more from adults.

"We started going into the schools a lot more trying to get the message of prevention out there, and we do this through the children because in recent years we found that three children were dying to one adult in fires," Emilio Ebanks, communications officer at the Jamaica Fire Brigade, told The Sunday Gleaner last week.

"That was the real need for the intervention programme, and we have actually reversed that trend; and while it is that we only had four for last year, we want to get it down to zero," added Ebanks.

He said more needs to be done to change some wayward cultural practices among adults, who still take hazardous chances with fires. Last year, 34 adults died in fires while at least nine adults have lost their lives in fires since the start of the year.

"We have also been going into communities, talking to persons as well, training persons ... as to what to do to prevent fires, what to not do," said Ebanks.

"In years ago, we had a lot of cases where adults were leaving children at home. We have been trying a lot lately to discourage persons from doing that," added Ebanks.

Two Saturdays ago, a five-year-old boy and his friends barely escaped with their lives after a car under which they were playing ignited in a garage on Rum Lane in Kingston. Five vehicles were destroyed in the garage.

Guardians of the five-year-old said he had been missing from early that morning, and only surfaced when flames started coming from the garage, which was connected to his house.

She said the CDA is urging parents to be more aware and responsible for the safety of their children.

"We are concerned about the number of children reported to be neglected by their parents and those left unsupervised. One of the areas we see resulting in further abuse to the child, and even death, is where children are left to play with fire or flammable items," said Gage-Grey.

"We are asking, in this Child Month, for parents to be very vigilant. We recommend, for example, that we don't use open flames like candles, or leave matches, lighters lying around where children can have access to them and use them," added Gage-Grey.