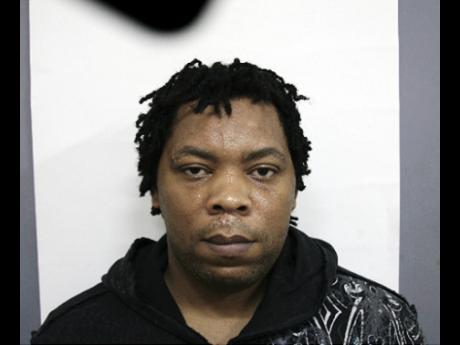 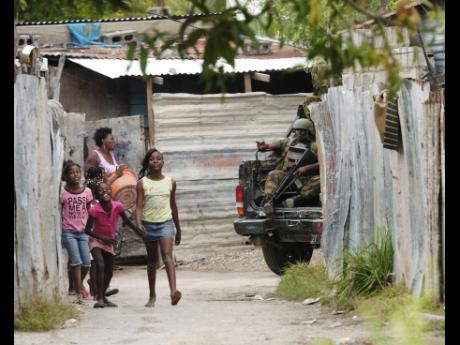 Ricardo Makyn
In this 2009 photo children walk along March Pen Road in Spanish Town, St Catherine while soldiers patrol the community following a protest by residents demanding the release of Tesha Miller from custody.
1
2

He has been dubbed Jamaica's most infamous gang leader since Tivoli Gardens strongman Christopher 'Dudus' Coke was extradited to the United States, but Tesha Miller is adamant that he is being falsely labelled.

In an exclusive interview with The Sunday Gleaner, the alleged leader of one of Jamaica's most notorious criminal networks, the Clansman Gang, said he has been accused of and linked to crimes he knows nothing about, and that has led him to illegally seek safe haven overseas on two occasions.

"I want everyone to know that I am neither a gang member nor a gang leader, and I have no interest in leading any gang," Miller told our news team.

"I just want to be left alone to live my life, to accomplish my goals and earn a livelihood," said Miller, who is a welder by trade and who has dabbled in music.

"I have no fear; I just want to be left alone to be a law-abiding citizen and to be a productive member of society and a good father to my children," added Miller, who is featured in one of the most violent songs by incarcerated dancehall artiste Vybz Kartel.

In the song, Stop Gwan Like you Tuff, with Gaza Slim, Kartel boasts that even if his enemy runs into a church, he will kill him there; and he then goes on to say, "A one don if a nuh me, a Tesha Milla."

But according to Miller, who was twice charged but not convicted of murder, he has never been involved in any killings, nor has he ever given orders for anyone to be killed.

He said his name has been called in connection with many acts of criminality because: "I live in a community in which there is always conflict with other communities, so I can only say that I am a victim of guilty by association."

Miller also rubbished reports that he leads the gang that operates one of the biggest extortion rings in Jamaica.

"No one on the face of this earth can come up truthfully and say I have extorted a dollar from them."

It is alleged that Miller, 36, was the undisputed leader of the ruthless Clansman Gang, which has been linked to several shootings and a multimillion-dollar extortion ring that stretches from St Catherine to Clarendon.

In recent times, with Miller either in jail or overseas, the gang has split, with a deadly feud reportedly over who should be the 'Big Man'.

But Miller told our news team he has no interest in criminal activities or being part of any gang as he wants to be a role model for his children and other young people in his community.

He said he is afraid of trouble and of being accused of crimes he did not commit, and that's why he fled from Jamaica on two occasions.

"I have personal experiences of being framed for crimes I did not commit," said Miller as he outlined the times he had to face the court and even spent time in prison.

RESPECT FOR LAW AND ORDER

He told our news team that he has the utmost respect for law and order and believes that persons should be punished if they are guilty of crimes, but persons should not be framed.

"A person does not have to see you to tell a lie on you. Lies can be told from a distance, and that is what I am running away from," added Miller.

The alleged gang leader noted that between 2004 and 2005, he had two murder cases in the Home Circuit Court which dragged on until 2008-2009 when Queen's Counsel Valerie Neita-Robertson and attorney-at-law Everton Bird pointed out the flaws and he was freed because of insufficient evidence.

"It was a very nervous feeling because although I know in my heart that I was innocent, I did not know what was going to be my fate," said Miller.

In 2010, Miller found himself back before the courts, but this time, he was convicted on charges of illegal possession of a firearm and robbery with aggravation, and sentenced to 15 years in prison after he was found guilty of robbing a man of his motor car.

Miller told our news team, as was his defence in court, that he was not in the area where the robbery took place and he still cannot understand how he was accused and convicted.

He said he is grateful to Neita-Robertson and attorney-at-law Bert Samuels, who represented him on appeal and were successful in getting him released after the court found that the identification evidence was weak.

"Prison is a dreadful place. I was even tortured in prison and I would not want my worst enemy to end up there," said Miller.

"This is why after I was released, I decided that I had to leave Jamaica because I did not know who next was going to frame me," added Miller.

New timeline for update of ‘laughable laws’
...12 years of conflict with the law but no conviction for any major crime
Tesha ran from lies - Miller says made up stories caused him to seek refuge abroad twice
Laughable laws! - Chuck pushing for speedy review of legislation with ridiculously low fines
Tesha's deportation delayed