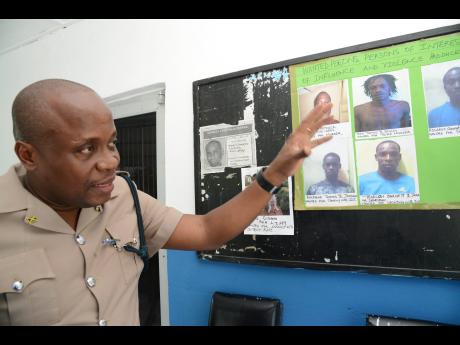 Rudolph Brown
Assistant Superintendent Charles Cain points to photos of the most wanted men in the Gregory Park area of St Catherine.

Residents of Gregory Park in St Catherine are living in fear as five men believed to be at the heart of the violence in the community remain on the run.

A bloody gang feud has left the usually bustling Cottage Road section of the community under the gun and fearful residents are looking to the police to save them.

Last Tuesday, the police carried out a major operation in sections of the community, including Walker's Avenue and the area dubbed 'Gulf', where it is alleged that thugs can be seen walking with rifles during the daytime while threatening to kill their rivals.

Assistant Superintendent Charles Cain, zone commander for the Caymanas area, told The Sunday Gleaner that four of the 37 persons detained during the operation last Tuesday were wanted in connection with incidents in the area.

STILL ON THE RUN

According to Cain, five other wanted men, including one linked to a triple murder last year, managed to elude the dragnet.

"Marlon Barnett, he is also called 'Jomo', is the outstanding one in the place. He gives the orders, and he thinks that he should control the entire space when it comes to Gregory Park and him being the one don," said Cain.

He added that Jomo is from the area of Portmore known as 'Compound' and has many enemies, most of whom are not willing to accept his agenda.

"Ian Thomas, also called 'Scaley', is wanted for a triple murder last year, which involved three youths from Newlands. He is regarded as the 'Big Man' in the Gulf.

"There is nothing that happens in Gulf that he doesn't know," added Cain. He said Thomas is also a person of interest in the murder of fruit vendor Fabian Benjamin about two weeks ago.

According to the police, Benjamin was regarded as a person of influence in the area.

He was shot and killed at his stall near Walker's Avenue on May 18, when a five armed gangsters attacked him.

A second man was shot in that attack and up to late last week, he remained in hospital in a serious but stable condition.

The other Gregory Park wanted men being hunted are Raymond Patrick, also called 'Bud Head', Roushane Thomas, also called 'Jordan', and Ricardo 'Numpo' Codnor. All three are wanted for either murder or shooting with intent.

Last week, residents gazed as the members of the security forces patrolled the area, and Cain said the crime has caused some persons to avoid Cottage Road and its environs altogether.

"People scared to go out on the front when it come down to night. They even afraid to walk in the daytime, too, like now because remember that is day them kill the man couple weeks ago," said one Gregory Park resident.

He added that at least three women have been forced to flee the community since Benjamin's death.

Richard Williams, principal of the Gregory Park Primary School, situated on Cottage Road, said fortunately, the recent spate of gang rivalry has not yet impacted students at the school.

"The (latest) shooting incident happened when the students were going home. Then they had the holidays. I don't know how many students would have witnessed it, but nobody has mentioned it all day," said Williams.