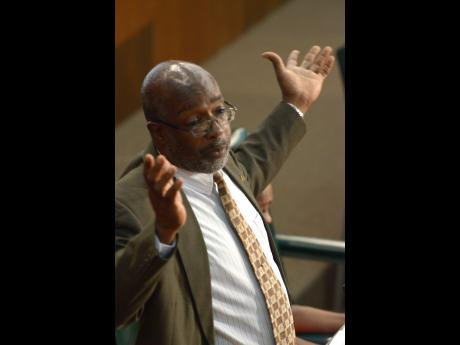 The redrafting and retabling of a controversial bill proposing tighter regulations on banks and deposit-taking institutions has been met with further delays after having been previously stalled in the Lower House of Parliament.

On May 10, Fitz Jackson, the opposition backbencher member of parliament who has been at the forefront of demanding financial justice from banks, withdrew the bill, which had proposed changes to the Banking Act, but not before rebuking his parliamentary colleagues for the lack of support.

He lamented that despite commencing debate on the bill, in January, there was not much progress in getting the bill passed in the Lower House.

The South St Catherine representative told Parliament then that he would have retabled the bill in two weeks with some revision, which included input from stakeholder groups.

That retabling should have been done around May 24. It was not done.

However, yesterday, Jackson told The Gleaner that the delay was due to issues with drafting at the parliamentary counsel.

"The delay is in the drafting. It is not in my hands, so there is nothing more that I can do at this point to speed it up. It is a matter of the parliamentary staff completing the drafting," Jackson said.

Jackson stated that he was hoping that by next week, the drafting of the bill would be completed so that it could be reviewed and placed back on the order list of Parliament.

He was adamant that even with the delays, he was firmly committed to having the bill passed to end the injustice that he claims banks have been meeting out to customers.

"I can assure [the people], there is no wavering. I am resolute to continue to the end because there is an injustice that has been done," Jackson said as he sought to dispel suggestions that he has backed down from the issue.

Jackson had said that it was his intention to have the bill go right into the conclusion stage once it has been retabled.

Among other things, the bill is proposing to end a range of fees that banks have imposed on customers and also to mandate minimum services that customers should get.