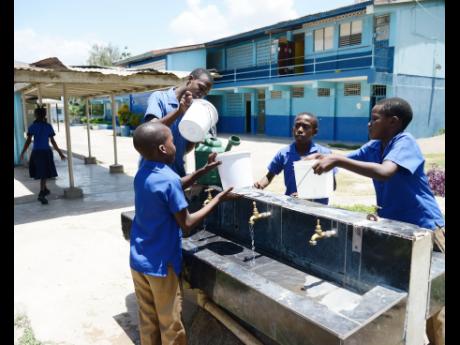 Ian Allen
Students at the Tredegar Park Primary School in St Catherine are forced to use buckets as there is no water in the pipes. 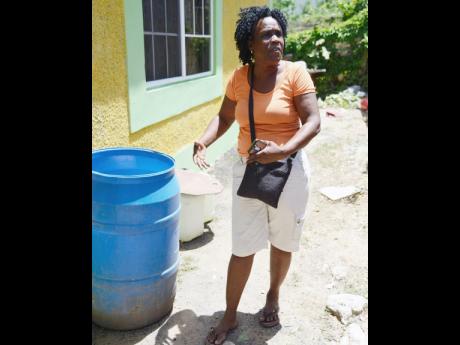 Ian Allen
Marcia Smith points to the drum she uses to store water at her house in Tredegar Park.
1
2

The gunfire has subsided and persons are starting to return to their abandoned homes in the volatile community of Tredegar Park in St Catherine, but those who have returned say that they are facing another injustice: the absence of water in their pipes.

"It is affecting us bad around here because every day, me have to keep buying water and me cannot afford to buy water," said Marcia Smith, who lives metres from the Tredegar Park All-Age School, where students have been washing their hands in buckets for years.

"When the war did 'round here, it was worst because we had to go to Quarry and we couldn't get to go around.

"Very rare the parish council send one truck with water. Otherwise, we constantly have to buy it. Me live wid me husband and me two son dem, and every week I have to carry my clothes to my daughter dem go wash," added Smith.

She told our news team that she spends at least $2,500 each month to fill a water tank at her house.

The figure increases significantly if she decides to wash her clothes and have a shower at the house where she has lived for more than 20 years.

"And if you have $2,000, the water truck man dem complain. Dem don't want to give you," said Smith as she argued that persons in authority are well aware of the plight of the residents.

"And if we block the road, you see the parish (municipal) council send in a little truck and fill up one and two drums," charged Smith.

At the Tredegar Park Basic School, where 37 toddlers are enrolled, teachers face a health crisis whenever the pupils go to the bathrooms.

"The National Water Commission use to send the truck to fill the tanks at the school, but from January, they said to me that I have to have an account before I can get any more water," said Sheila Marsh, principal of the school.

According to Marsh, it would cost the school approximately $8,000 to set up the account before it is charged every time water is delivered.

"Is beg we have to be begging. We have to beg for the water, and for a country that is the land of wood and water, it is very bad," argued Marsh.

"We need the water because we have to use the water to cook, and the children go to the bathroom very regular. Is two weeks straight now I don't have any water," added Marsh.

Tredegar Park made the media front pages in 2010 when eight persons - five men and three women - were slaughtered by thugs who kicked in the doors to their homes, methodically discharging bullets from high-powered rifles.

The incident sparked a massive exodus from the community as fearful residents fled.

Now, life has started to return to normal in the community although the shells of houses, some riddled with bullet marks, remain as grim reminders of the tragedy.

But the residents argue that things would return to normal quicker if there was water running through their taps.

"It wiped out our farm project because we don't have any water to water the plants. We have had this water problem for about six or seven years," said Hyacinth Rochester, principal of the Tredegar Park All-Age School as she pointed to the plot where they once grew agricultural produce.

Now, the school's farm has been reduced to dried leaves and stunted watermelons.

"I would encourage the authorities to please provide some water through the pipelines so that we can resuscitate our farm project so that we can have running water in the bathroom. The children have to be using water out of drums, and that is not sanitary," said Rochester.