Bunting on the defensive after confronted with FLA bombshell 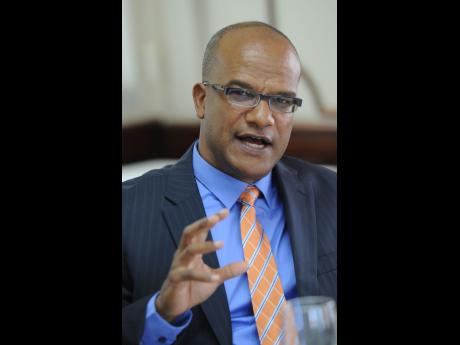 Peter Bunting, the opposition spokesman on national security, is on the defensive, now claiming that the Firearm Licensing Authority (FLA), while under his watch as national security minister, did not corruptly grant licences.

His response follows Gleaner reports since Friday citing documents showing questionable decisions taken by the board while he was national security minister.

Bunting served as minister from January 2012 to March 2016 under the previous People's National Party administration.

He has strongly criticised the current Jamaica Labour Party (JLP) administration for allegedly facilitating corruption at the FLA, whose board, he said, in a statement Monday, was forced to resign "in disgrace" earlier this month.

The Sunday Gleaner reported several questionable decisions in the past six years. One of them involved an applicant who was found to have been convicted and sentenced for illegal possession of firearm and ammunition in 2011 and his April 2014 application denied. This was overturned on appeal in June 2014.

Sources also pointed to a case in 2013 where it was found that the applicant had been charged with illegal possession of firearm and the FLA's report revealed that he "has intemperate habits". In October 2013, his application for a 12-gauge shotgun was denied and it was recommended that a licence for a 9mm pistol he held be revoked.

But he was later granted the licence for the shotgun and given back the 9mm licence on appeal.

There was also a case of a convict being denied a licence in 2011 but granted one on appeal in March 2012.

Accusing the administration of leaking information to deflect attention from the current scandal at the FLA, Bunting said that he was "confident" that the boards of the FLA while he was minister "followed due process and kept diligent records of their actions and decisions".

Robert Gregory chaired the FLA board while retired director of public prosecutions, Kent Pantry, headed the review board during Bunting's tenure.

"[It's] a very transparent attempt by the Jamaica Labour Party (JLP) to deflect attention away from its sordid politicisation and corruption of the FLA, which even now is still headed by one of its political activists - Shane Dalling," Bunting said of the allegations reported by The Gleaner.

Bunting added: "Fairness and natural justice demand that past FLA members whose reputations are being tarnished be given access to the files in question to be able to first identify the case, as well as defend and justify their decisions."

The Major Organised Crime and Anti-Corruption Agency and the Office of the Contractor General are separately investigating allegations that the Firearm Licensing Authority approved more than 100 gun licences to people of questionable character.