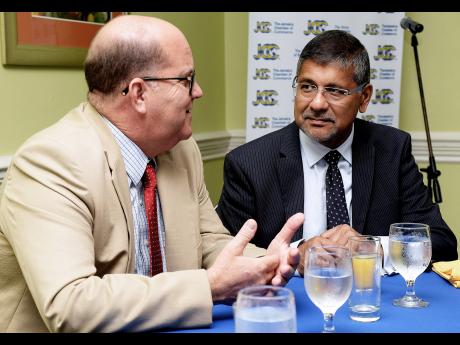 Asif Ahmad, British high commissioner to Jamaica, says that methods he employed in helping to fashion a healthy trade and investment relationship between the United Kingdom and the Philippines, and which helped to provide a sturdy economic platform in that Asian country, can be replicated in Jamaica.

Ahmad, who only recently began his tenure in Jamaica, after serving in the Philippines as the UK's ambassador, said that he wants to continue having dialogue with national stakeholders, with the aim of identifying challenges the country faces and to see how best Britain can assist.

"When I set foot in the Philippines, investment into the UK from the Philippines, with the exception of a few apartments and parent's financial support for their children doing studies, was zero. By the time I was finished, it was £1.2 billion," Ahmad explained, during a Breakfast Conversation forum put on by the Jamaica Chamber of Commerce at Knutsford Court Hotel in Kingston yesterday.

"And in 2015, my record resulted in the Philippines becoming the second-fastest growing market for the United Kingdom, at 38 per cent. That's a matter of record. Now, can I repeat those things over here? I'll give it a damn good try, but I cannot do it alone," he continued.

He said that the experience he gained in the Philippines suggested that Jamaica can once again enjoy a vibrant relationship with Britain.

British High Commissioner to Jamaica, Asif Ahmad, said that it is high time that diminishing relations between Jamaica and Britain be revitalised, referencing a time when Jamaica enjoyed preferred treatment in trade and investment.

Ahmad referred to the 1960s, when he said that Britain was the life, blood and sweat of the Jamaican economy. Ahmad questioned his country's "diminished presence" in Jamaica, coming out of a period when "common law, common business practices and common heritage in language, and a common view of the world" were legacies of this country's colonial past.

"I think that unless we do some of things we did in the Philippines, we're not going anywhere. So from now until perhaps February, you will see a heightened campaign under the banner of Global Britain, and you will see us shamefully projecting ourselves, not just in Kingston, but spending some of the money that we'd attract from London in every parish in Jamaica, so that you know who we are, what we're doing, and where we're heading," he said.