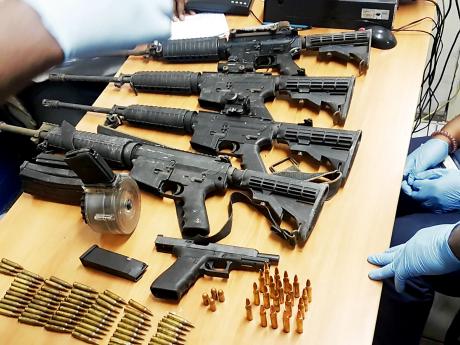 Four M16 assault rifles, a Glock 40 pistol and a quantity of assorted ammunition were seized in Flanker, St James, yesterday.

Four M16 assault rifles, a Glock 40 pistol and a quantity of assorted ammunition were seized in Flanker, St James, yesterday, during a nine-hour police-military operation that targeted the much-feared 'Red Dirt' section of the community that has been under criminal siege in recent weeks.

When the Gleaner team arrived in Flanker at approximately 11 a.m., after news broke of the gun find, a large contingent of police and soldiers was seen combing through several yards and searching rooftops with metal detectors.

Curious residents were out in large numbers observing the operation.

At one point, a senior officer was summoned into a yard. He later emerged with a firearm that was stashed in a black 'lada bag' (plastic bag).

"The operation started at approximately 4 a.m. Earlier this morning, we seized four M16 rifles and a quantity of ammunition, and just now we seized a handgun," said Deputy Superintendent Gary McKenzie, the operations officer for the St James police.

During the operation, several young men were rounded up from various lanes in Flanker and placed into a police van.

When asked by a relative of one of the men why they were being detained, a police officer stated that they would be taken to the Freeport Police Station and processed to determine if they had criminal antecedents.

"If he is a good boy, you will definitely see him later, long before dinner time," the policeman said. "However, if he is a badman, you might not see him again until he gets a court date."

While the residents of Red Dirt were reluctant to speak to the media, those from rival sections of Flanker were elated about both the raid and the gun find.

"A whole heap a gun dem have over deh. Dem have some name 'Jungle Jesus' and some name 'Tropical Breeze'. When dem start buss shot, a nuh nothing good," said a resident, who asked not to be identified. "Di police and soldier dem nuh fi stop search until dem find all di a gun dem."

Senator Charles Sinclair, the councillor for the Flanker division, said he was not surprised that the security forces had found guns in the community as, according to him, there have been recent reports of shootings in the community.

"I know the law-abiding residents are quite happy because a gun in the wrong hand is a tool of destruction, so I want to congratulate the security forces in finding these guns today, they may have saved many lives," said Sinclair. "When the guns are taken out of the hands of wrongdoers, it must be a good thing because crime and violence is having a negative impact on the community."

While the security forces have not been enjoying much success in Mt. Salem, which has been under a zone of special operations initiative since September 1, they have had better luck in other communities, including Cambridge, where one M16 rifle, an AK47 and several handguns were seized in recent weeks.

Senior Superintendent Marlon Nesbeth, the commanding officer for St James, said the police are intensifying their assault on criminals in a bid to remove illegal weapons from the streets.

"With over 200 murders since the start of the year, we can't afford to relax. We have to keep going after the criminals and the illegal firearms," said Nesbeth. "The more guns we seize, the more lives we are saving. We are calling on all law-abiding citizens to join us in this fight to take the illegal guns off the streets."