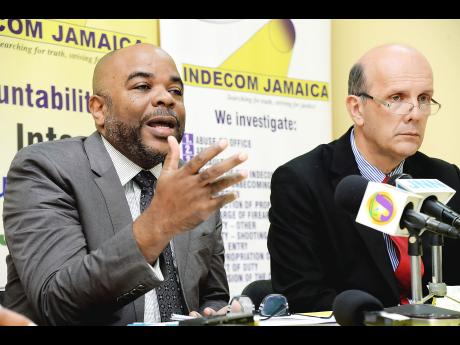 Commissioner of the Independent Commission of Investigations (INDECOM) Terrence Williams yesterday said that responses are slowly coming in from the hierarchy of the Jamaica Constabulary Force (JCF) and the Police Service Commission a day after he informed Parliament that the leadership has failed to take action against 138 senior cops recommended for disciplinary sanctions.

No action in seven years

"But the troubling issue for us is that it is seven years since INDECOM has been around and there has not been a single disciplinary proceeding following a recommendation, and that is amazing!"

Noting that the latest investigations seem to be provoking some responses among the police regulatory body, Williams added, "We are hoping to get more Williams from the Police Service Commission because we were not getting much from them as to the status of these numerous cases."

Williams said that while the law allows for the constabulary to explain to Parliament why no sanctions have been undertaken, no explanation has been tendered.

INDECOM, in its April to June quarterly report, which was tabled in Parliament, said that the commission has submitted 97 cases involving 138 officers to the police force and that an investigation revealed that none of the officers listed have been sanctioned.

... Concerned about increase in fatal shootings

The Independent Commission of Investigations (INDECOM) has expressed concern over a 41 per cent increase in the number of fatal shootings by the security forces in 2017 compared to the same period in 2016. At least 122 persons have been shot dead by cops this year, while 63 were shot and injured.

Members of the Jamaica Defence Force were reportedly responsible for only six of the fatal shootings.

"At the end of August this year, the total number of fatal shootings was 111, and it is worth noting that 111 was for all people shot and killed in 2016. This time last year, the number of people shot and killed was 86," said Hamish Campbell, assistant commissioner, during a press conference at INDECOM's New Kingston offices yesterday, describing the increase as an unacceptable departure from what was regarded as a change in the JCF.

"Investigations by INDECOM show that a significant percentage of those shootings are not in accordance with eye-witness accounts provided. Of the 185 people who have either been shot and killed or shot and injured, 42 per cent of them did not have a firearm. A smaller number had other weapons like ice picks, stones, a piece of wood, and a number having a machete or knife."