All of us feeling crime, says Denham Town resident 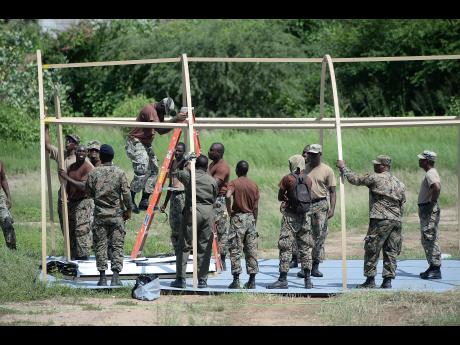 The young, the old, vendors and even parents taking their children to school - all were sent digging into their purses and wallets for identification as the second zone of special operations (ZOSO) brought movement to a crawl in sections of Denham Town, west Kingston, yesterday.

Several streets - some littered with debris and spouting raw sewage - were transformed into heavily guarded checkpoints as soldiers demanded that anyone crossing declare his name, date of birth, and registration for motor vehicle.

"It good still, me not going to underrate it. Them can go through and do what they are doing and people can see what is happening. Them stop me and ask for my ID, but I never have no problem. All of us are feeling it (crime)," said juice vendor Kenneth Anderson after being frisked by soldiers at a checkpoint on Regent Street.

Major Basil Jarrett, the Jamaica Defence Force's civil military cooperation and media affairs officer, said the declaration of Denham Town as a ZOSO followed a curfew that had been imposed in the area from early yesterday morning.

"That would have given us the opportunity to set the stage for activities that would follow with the prime minister's declaration, which was about a few minutes ago," said Jarrett, shortly after 10 a.m., noting that Denham Town shelters more than 10 criminal gangs.

"Even prior to the ZOSO, we have had ongoing operations in this area in response to the escalating gang warfare," said Jarrett.

Soldiers yesterday used tractors to clear away debris from the Denham Town Restorative Justice Centre, where they set up their main operations base in the area.

Major Basil Jarrett, the Jamaica Defence Force's civil military cooperation and media affairs officer, said special care was made not to include two major hospitals and certain schools in the zone of special operations in order to facilitate their smooth operation. Outside of those provisions everyone crossing checkpoints had to be searched.

That did not go down well with hairdresser Karen Shakespar, who lost two clients yesterday when they were barred from crossing a checkpoint on Charles Street to her shop without identification.

"I have children to send to school. I am losing customers, and I asked if I can talk for my customers and the soldiers dem said 'no'."

"Is dem work dem doing, but in the end, dem going to get paid and me not going to get none," she said, noting that she would have made at least $4,500 from her two clients.

Meanwhile, residents from outside the community who turned out to collect money offered through the Programme of Advancement Through Health and Education (PATH) at the Denham Town Post Office on Albert Street had to wait longer than usual as soldiers processed them one by one at a nearby checkpoint.

"I think they must train them on how to talk to people. Some of them too crude. They need customer service," said Mills, infuriated after passing through the Regent Street checkpoint.

Holding had to walk a part of the way to work after her husband was prevented from driving across the checkpoint. Nonetheless, she is supportive of any crime-reduction efforts in the area.

Nardia, a resident, praised the prime minister for choosing Denham Town for the second ZOSO.

"A we nice, clean prime minister say him want him place to clean up, so him drop ZOSO. I have no problem with it. The only thing is that if it was Eddie (Edward Seaga), him woulda down here with we from morning," Nardia said.