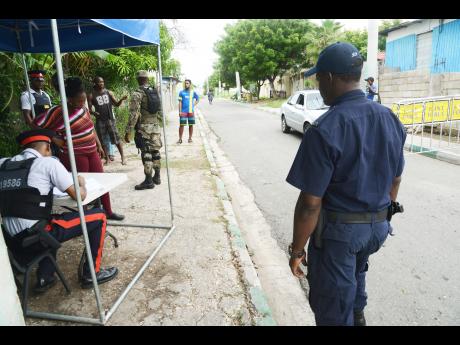 Rudolph Brown
Members of the Jamaica Defence Force and the Jamaica Constabulary Force on Little King Street, the new boundary of the second zone of special operations in downtown Kingston. 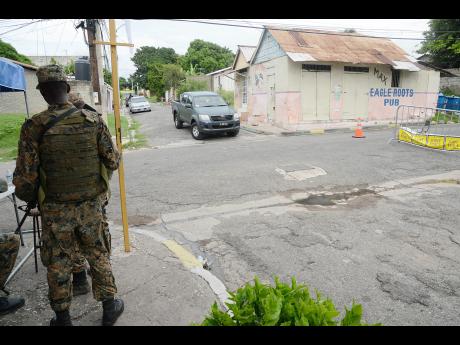 Rudolph Brown
Members of the Jamaica Defence Force posted near the site where six persons were shot, one fatally in May.
1
2

Seven months ago, residents of Hannah Town in Kingston were cowering in fear after gunmen sprayed at a birthday party on Hannah Street, killing one man and seriously injuring six others.

"It was expanded based on operations and intelligence assessment with regards to the areas around Denham Town," said Superintendent Stephanie Lindsay, head of the Jamaica Constabulary Force Corporate Communications Unit.

"The information suggested that persons are moving from Denham Town into some areas and seeking refuge in those spaces," Lindsay added.

"We want to maintain the integrity of the zone of special operations, and because of that, the recommendation was made to the prime minister and it was approved."

Yesterday, a release from the ZOSO Communication Centre listed an area called 'Shooters Hill' among those the expansion had covered.

"The new border has now pushed the boundary at Albert Street further westward to include Water Lane. The new western boundary is Little King Street," the release read. "On the northern side, the boundary is pushed northward from Greenwich Street to Blount Street."

It added: "Denham Town Primary School continues to remain outside the zone to allow unhindered access to student and teachers."

Yesterday, Petagaye Williams, whose birthday party was shot up at the corner of Hannah Street and Rose Lane in May, said she was trusting God that he would allow her to walk again after she was injured in the incident.

Williams said she was inside a shop with her back turned when the shooting started. She was hit in the side and back, while six other partygoers fell to the ground. Forty-five-year-old Dalton Dale was shot and killed.

"I was inside and my back was turned to the outside. Dem say is drive-by, but me nuh see nothing. I just hear the shot dem and I realise I get shot when I started feeling weak," said Williams, who since then has been using a wheelchair to get around.

"Me still a cope with it, don't? It slow up me life for a moment but it's just for a moment. Normally, me would be working, but now me deh home," said Williams, who is in her 20s and who said she was employed at the nearby Kingston Public Hospital.

"Yes, ZOSO makes sense. It will help to cut down on crime, but how long them (security forces) are going to be there for?" she asked, a common question among residents who praised the ZOSO expansion yesterday.

'Scully', an elderly man from the community whose car was left riddled by the bullets in May, said he wished the security presence remained forever.

"Me still here and me really glad for it, man. Trust me. I really glad," he said with a smile, through a small window to his home. Scully luckily escaped the attack, but had to repair his car's radiator after it was pierced by bullets from a high-powered rifle.