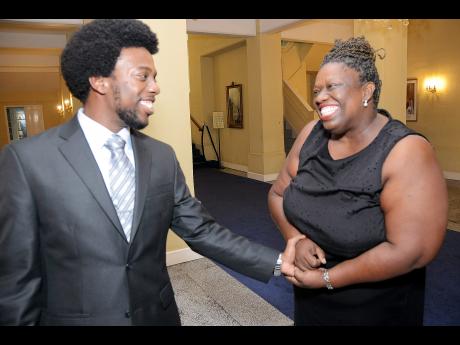 Ian Allen
Jelani Munroe (left), the 2017-2018 Rhodes Scholarship winner, being congratulated by his mother, Erica Boswell-Munroe. Jelani was given the nod ahead of nine other candidates.

For the 2018 Jamaica Rhodes Scholar, it is the little things that mom did on the big day.

"She thought my shoe laces weren't imperious enough, so she untied them and redid them. I wanted to wear a blue suit, but she said no, 'You're going to wear a black one'," Jelani Munroe recounted of his mother, Erica Boswell-Munroe, minutes after Governor General Sir Patrick Allen declared him the chosen one from a competitive field of 10.

"It's another way of her expressing her love because she knows that I go into the (interview) room on my own, but she can certainly try to help make sure that nothing else distracts," Munroe added.

Moments later, an ecstatic Boswell-Munroe arrived at King's House to news of her son's latest achievement.

Having greeted and congratulated the other candidates, she embraced him for a lengthy period and exclaimed: "Thank you, Jesus!"

A former head boy of Campion College, the 23-year-old Stanford University graduate is bound for the University of Oxford, where he will pursue a Master of Philosophy in Development Studies. Munroe currently holds a bachelor's degree with honours in economics and public policy.

"You have 10 people who are genuinely brilliant, so it could have been any of us, so I'm just relieved and thankful," Munroe told The Gleaner.

"They're exceptionally outstanding, both the overseas-based candidates and those from the University of the West Indies. But Jelani was just that much more outstanding than the rest of the field," said Goldson.

"He's clearly someone who's intelligent and thoughtful. He's concerned about helping the less privileged in Jamaica. He's full of energy, dynamism, and we believe he will really make an impact on Jamaica in the years to come," he added.