'Get used to it!' - Police watchdog unfazed by Holness' criticism 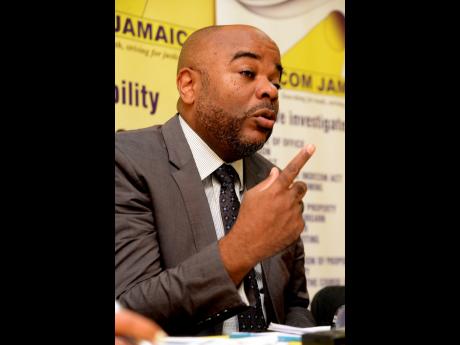 Commissioner of the Independent Commission of Investigations (INDECOM), Terrence Williams, is demanding clarity from Prime Minister Andrew Holness for a statement he made on Sunday at the Jamaica Labour Party's 74th annual conference at the National Arena, where he suggested that the agency demoralises members of the police force by their overzealous manner of conducting investigations.

During a press conference at the commission's New Kingston offices yesterday, Williams was adamant that INDECOM will continue to carry out its duties as outlined by law.

"We do not share the view that at any time, INDECOM has gone too far. INDECOM was formed by an act of Parliament to combat impunity and injustice in the security forces through independent scrutiny. The act says that we must take control of scenes. The law says that accounts must be obtained from police officers as soon as is possible. Cases are put before the court for adjudication that are, in our opinion, deserving of charge. If we had failed to do any of these things, it would be said that we neglected the important duty assigned to us by Parliament."

SOME IMPROVEMENT FROM FORCE

Williams acknowledged that the JCF has been improving in its observance of human rights, but said that that is as a result of guidelines the police now have to follow.

"We recognise that there has been some improvement in human-rights observance by our security forces. This is as a result of being guided by principles, but there is still a lot to be done. If it is true that members of the JCF are neglecting their duties because they are displeased with the accountability mandated by our Constitution, the problem is with the culture of the force and its leadership. INDECOM also investigates the army and the prison services. Interestingly, from these organisations, there has been no argument of low morale stemming from our investigations," the commissioner stated.

"I don't know if the police fear INDECOM as a whole, because there are many members of the force who have never been subjected to an INDECOM investigation. It is a very small percentage that is subjected to INDECOM investigations, but the truth is that there are still many officers who remember the days when there was not this kind of accountability. Many of them in the high command certainly remember those days and may be yearning for some of them to return to those days."