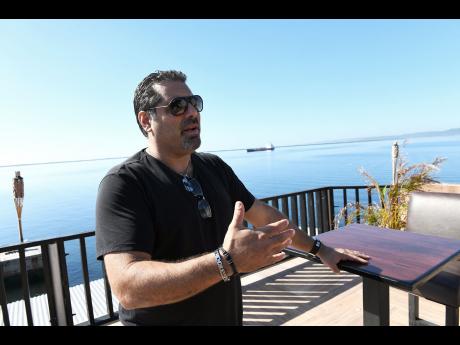 Norman Grindley
Andrew Azar on the top floor of the planned entertainment and food hotspot on the waterfront in downtown Kingston.

Under a plan developed by businessman Andrew Azar and his partners, a new entertainment hotspot should have by now be fully operational on the Kingston waterfront to welcome the hundreds of persons expected to travel there for the Urban Development Corporation (UDC) annual Fireworks on the Waterfront.

But the scheduled mid-November opening of the facility that was shuttered 17 years ago has been pushed back to late February, and Azar is blaming the UDC for the delay.

According to Azar, the investors have lost hundreds of thousands of dollars as a result of the UDC putting a stop order on the work to develop the area into a spot for food and entertainment.

"There were some requirements by the UDC during the planning stages, plans and stuff that we had submitted to them that in their opinion were not of the adequate standards that they needed," Azar told The Sunday Gleaner.

"So we had to redo the plans, and at that point they had issued us some sort of stop order until the plans were up to their standards," added Azar.

He said after much effort, the partners were able to comply with the UDC's stipulations, and last week they were issued a letter giving permission for work to resume.

"However, it has hurt me financially as I have lost many rentals for November and December," said Azar.

"But they are going to say whatever they needed was very important to the development. My argument is that we could have done it concurrently; so I could have got my plans made while holding an event, but they gave me a stop order and it was very frustrating.

"We are investors, we are investing more than $60 million down there, and I don't think really we were treated like investors. But it is what it is, and whatever we weren't compliant with we were told, and we have now become compliant," Azar added.

He told our news team that in addition to the loss of potential earnings, the partners lost hundreds of thousands dollars' worth of plants, which persons stole during the lull in work, while ceiling fans valued at some quarter million dollars were damaged by wind.

Two years ago, the Urban Development Corporation signed over the run-down Victoria Pier to Yosamini Holdings Limited, under a lease agreement, for an initial period of 25 years.

The company, in which Azar and Barry Gardener are partners, set about redeveloping the complex, which spans 1,963 square metres on three levels.

The first floor is slated to house a sports bar, which is likely to be operated by Ribbiz, while the second floor will have a branch of the renowned seafood establishment Gloria's, which is renting the space to replicate the Port Royal experience. There are also plans to have a Devon House I'Scream, an Island Coffee Shop, a pizza parlour and a natural juice outlet.

"People can rent the roof for parties and weddings that are affordable for lower- and middle-income persons, and then have the reception on the first floor," said Azar.

Azar acknowledged that it will be an uphill task to try and get persons to come downtown in the evenings, but he is promising very tight security.

He said arrangements are also being made with the Kingston and St Andrew Municipal Corporation to facilitate the development.