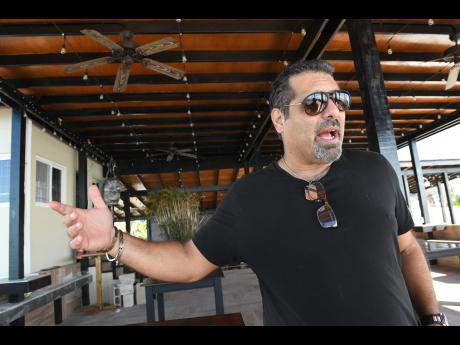 Businessman Andrew Azar is calling on the Government to roll out the red carpet to investors instead of red tape, following his experience with the Urban Development Corporation (UDC) in trying to redevelop the old Victoria Pier on Kingston's waterfront.

"If you come to invest here and you are investing in lower-income ghetto areas, you should be facilitated, not hampered.

"Because of the Government's bureaucracy nobody wants to have anything to do with the Government, and it shouldn't be like that. It should be more welcomed where people go to the UDC, see what idle property it has around, and they go and lease them and convert them. That's what urban renewal is about," added Azar.

Two years ago, the UDC signed over the run-down Victoria Pier to Yosamini Holdings Limited, under a lease agreement, for an initial period of 25 years. The company, in which Azar and Barry Gardener are partners, set about redeveloping the complex, which spans 1,963 square metres on three levels and is located on the seaward side of Ocean Boulevard.

But last September, the UDC issued a stop order after some of the developer's plans were deemed not to be up to standard, and while Azar is not opposed to the UDC insisting on certain specifications, he is not impressed with how the situation was handled.

"If I do a plan that is not to your standards, you don't have to issue me a stop order. You can tell me to get compliant by such date while we are working. And I think while they are trying to do a good job they need to be more one-on-one with investors," said Azar.

He added: "We thought a stop order was unnecessary and unreasonable, but we have to comply with the UDC's standards. It is just that they could have done it in a more friendly way."

Azar is also urging the UDC to be a bit more flexible in dealing with investors who are pumping resources into developing "downtrodden ghetto communities", as the only way out of poverty is through investment.

"I went to a couple of banks to finance this project and was turned down because of the risk of the project and the location, but somehow we have got it going," said Azar.

"I am not saying I would not deal with the UDC again, because the UDC is the land bank in Jamaica and if you want to do anything like this you have to deal with them, but I have learnt a lot," declared Azar.