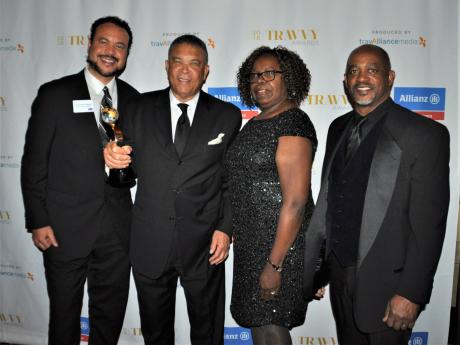 The dream team from the Jamaica Tourist Board celebrates their win Wednesday night as the best tourism board globally at the Travvy Awards in New York, United States. From left: Christopher Dobson; Donald Dawson, acting director of tourism and deputy director of the Americas; Marcia Sinclair; and Kenton Senior.

The Jamaica Tourist Board was, on Wednesday night, named Best Tourism Board in the global category at the annual Travvy Awards held at the Gotham Hall on Broadway in New York, United States.

The annual Travvy Awards, known as the Academy Awards of the travel industry, seeks to recognise excellence within the travel industry by honouring companies, products, agencies, and destinations for their outstanding achievements.

Suppliers, destinations, and individuals from across the world of travel are eligible to submit their nominations to be considered annually for the honour of being recognised as an innovator in the industry.

This year, more than 100,000 votes were cast by travel agents from key markets across the US to determine the 2018 Travvy Awards winners.

"It is once again a tremendous honour to be recognised as a high-performance innovator within the travel industry, and I share this award with my first-class marketing team who works assiduously to sell Jamaica," Donald Dawson, acting director of tourism and deputy director for the Americas, told The Gleaner.

The jam-packed event was hosted by travAlliancemedia, and winners were honoured during a black tie awards dinner and presentation attended by travel professionals from around the world.

Other winners for Jamaica in the destination weddings categories were the Hyatt Ziva Rose Hall, St James; the Moon Palace in Ocho Rios; and Sandals Ochi Beach Resort in St Ann.

The Hyatt Zilara Rose Hall won an award for Best All-Inclusive Adult Couples in the Caribbean & The Bahamas.