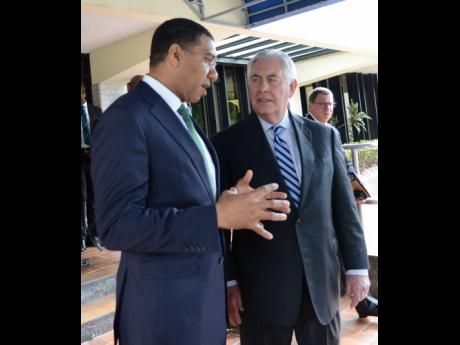 Prime Minister Andrew Holness says Jamaica chose not to take a position on the controversial United Nations (UN) General Assembly's vote late last year on a resolution to condemn the United States decision to recognise Jerusalem as the capital of Israel and to establish an embassy there.

In the December 2017 vote at the United Nations, Jamaica and six other Caribbean countries decided to withhold their votes on the Jerusalem resolution.

Responding to a query as to why Jamaica abstained, the prime minister said: "Jamaica did not need to take a position on another country's position on where they would want to see as a capital in the world.

"Jamaica conducts its foreign policy on principle. We are not conducting foreign policy for aid or for special benefits, so I want to make that position very clear to the Jamaican people," declared Holness while fielding questions from local and international journalists at a press conference at Jamaica House.

Also addressing a question about the US threat to pull aid from countries that voted against it at the UN, US Secretary of State Rex Tillerson said that his country has not adopted a new policy to penalise countries that do not share its values or position on an issue such as the Jerusalem resolution.

Tillerson said the US will be undertaking an examination of how it provides aid to countries around the globe.

He said that US President Donald Trump, in his State of the Union address last week, highlighted the need for America to review its support to countries around the globe.

"It's not been examined in quite some time, if ever, in terms of how does the United States want to think about the generosity of the American people, because this is the American people's money being provided to others, and what should the expectation be around what are we supporting?"