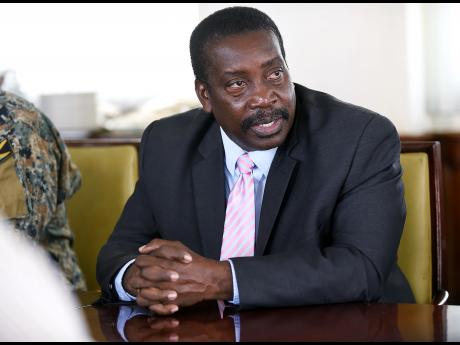 Security has been increased around former Minister of National Security, Robert Montague, following reports out of the United States of a possible threat on his life by gunrunners.

Montague, who was reassigned to the ministry of transport and mining in the recent Cabinet reshuffle, has now been granted additional police personnel at all times, with security also beefed up at his house.

So far, there has been no official word on what Sunday Gleaner sources say is a high-level probe being carried out by local and international law enforcement agencies, but local police sources said the threat is being taken seriously.

According to the sources, a confidential informant, who migrated from Clarendon to Bronx, New York, told police there of the plot recently.

According to information received, the informant reported that from time-to-time he encounters men who are engaged in smuggling guns to Jamaica.

He reportedly overheard these men saying that they want to kill Montague because "he is a CIA guy and is handing over scammers to the US".

The sources say that in a statement to law enforcement personnel in New York, the informant claimed that the gun smugglers also said they were seeking to set up legitimate businesses as a front for their illegal activities and were looking to recruit people who own houses with basements in order to stockpile their weapons.

He also alleged that the gun smugglers boasted about being able to get any information from Oxford Road. "The informant is not aware that the Ministry of National Security is located at Oxford Road, as he wondered aloud as to which office is located there," the sources said police in New York reported.

"He described the gun route as USA to Bahamas to Haiti to Jamaica, with drugs coming back to the USA from Jamaica via Haiti and Bahamas. He noted that when these men travel, they go by small aircraft or boat, for the most part," the report out of New York further claimed.

The informant further alleged that the gun smugglers were encouraging him to travel with some of them to Jamaica this week to meet their cronies.

The sources say while the informant was unable to supply anything but aliases for the gun smugglers in New York, he provided information on a Jamaican living in the Bahamas who is reported to be a major player in the illegal trade.

Late last week, efforts to contact Montague were unsuccessful, while Police Commissioner Major General Antony Anderson is yet to respond to questions on the matter.