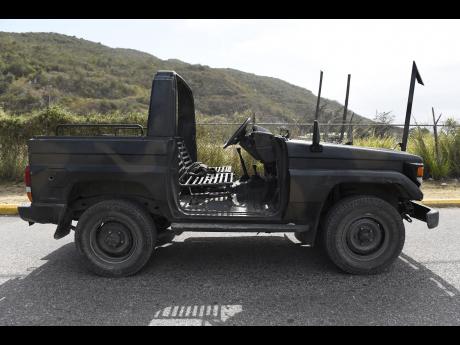 Gladstone Taylor
One of the vehicles without basic safety features that the JDF assigns to soldiers. 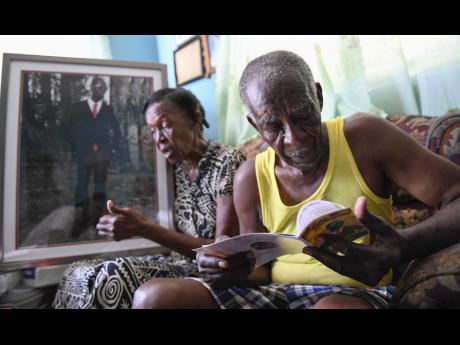 Gladstone Taylor
Desmond Malcolm and his wife, Verona, with a picture of their son, Omar, who died while traveling in one of the JDF’s vehicles. 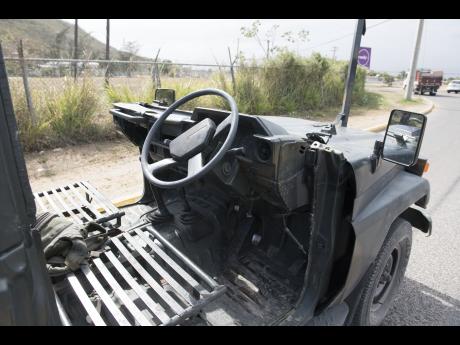 One of the vehicles without basic safety features that the JDF assigns to soldiers.
1
2
3

Scores of members of the Jamaica Defence Force (JDF) are putting their lives at risk each day by driving around in all terrain vehicles without some of the basic safety features for automobiles.

But the army says that its members are trained to deal with the challenges of driving in the vehicles, referred to by casual onlookers as 'Jeeps' and which have no seat belts and other basic features, despite road accidents involving the vehicles that have left one soldier and a civilian dead.

Last week, some members of the JDF who spoke to The Sunday Gleaner on condition of anonymity, said that it was common for their peers to be flung from the vehicles which have no windshields or doors.

"Whole heap of times we get fling out. Some man get fling out all a bush," said one soldier who was among a team on patrol in one of the vehicles last week.

"But we don't complain. We have to use what the Government gives us to work with. You just have to ensure your own safety," added the soldier as he jumped from one of the vehicles that had no handbrake, no seat belts, no side mirrors, and no cushions on any of the seats.

"They don't come like this, you know. They came with proper cushions on the seats, but over time, after being exposed to the elements, because as you can see there is no roof, the cushions deteriorate. We build back the frames," said the soldier.

In 2016, one JDF member died and three others were injured after they were flung from a vehicle along the Cousin's Cove Main Road near Green Island in Hanover.

The soldiers were reportedly returning to base from an operation when the incident occurred.

In February, Omar Malcolm, a civilian mechanical engineer employed to the JDF workshop department, succumbed to injuries he received after being flung from one of the vehicles in Old Harbour, St Catherine.

Reports are that Malcolm lost control of the vehicle, which crashed into a Honda motor car.

Last week, his parents, Verona and Desmond Malcolm, told The Sunday Gleaner that although he had been working for the JDF for many years, he was always wary of the vehicles.

"He told us that sometimes the seats slide and that it is easy to fall out of them, but we never thought much of it," said Desmond.

But civil-military cooperation officer at the JDF Major Basil Jarrett told our news team that the vehicles are not equipped with seat belts as these could prevent quick responses by soldiers if they came under gunfire.

According to Jarrett, the soldiers are trained to protect themselves inside the vehicles and to manoeuvre from them.

"While it is not practical or desirable to install seat belts in our patrol vehicles for the reasons indicated, there are a number of safety measures that we have put in place to reduce the risk to our soldiers," said Jarrett.

"We put our drivers through rigorous defensive driving training courses focusing on safe driving and manoeuvring out of troublesome situations.

"We have also made helmets and ballistic vests a key part of their personal safety set-up and carry out regular and routine maintenance of our fleet to ensure that vehicles are roadworthy under the most severe driving conditions," added Jarrett.

He said that the JDF was still carrying out investigations into the crash that claimed Malcolm's life.

Last week, acting head of the Police Traffic and Highway Division Superintendent Courtney Coubrie declined to comment on the possible breaches committed by the JDF with the vehicles on the nation's roads.

(EDITOR'S NOTE: An earlier version of this story suggested that the vehicles referenced were produced under the Jeep brand. While they are referred to by casual onlookers as Jeeps, they do not belong to the Jeep family.)