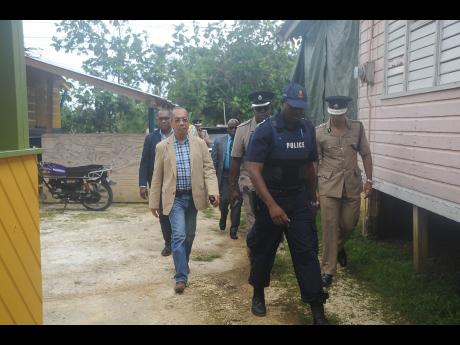 National Security Minister Dr Horace Chang walks towards one of the crime scenes in Sterling district in Grange Hill, Westmoreland, on Wednedsay, May 2.

National Security Minister Dr Horace Chang says that the gangsters responsible for the gun-slaying of seven persons in a 12-hour murderous rampage in Grange Hill, Westmoreland, on Tuesday night are animals that should be tracked down, located, and got rid of.

"The people who are perpetuating this kind of criminality are literally animals. We have to track them down, find them, and get rid of them," said Chang, who toured the community alongside Police Commissioner Major General Antony Anderson.

"I am not saying we are going to kill them. Apprehend and lock them up is the best thing, but if they engage the security forces, I will not tell them to call an ambulance," the national security minister said.

On a night that guns barked as never before in the deep-rural community, several houses and cars were destroyed alongside the five adults and two children who were killed. The violence is said to be the result of an ongoing feud between the Sterling gang and the Kings Valley gang, which are both based in the community.

Those killed have been identified as Joyan Myers of New Town; Tristan Brown of Top Lincoln district; and from Sterling district, Odane Drummond; Nadine Rowe and her 11-year-old son, Nicoy Bourne; and Sheldon Morgan and his two-year-old son, Sheldon, Jr.

Dr Wykeham McNeill, member of parliament for western Westmoreland, described the situation as extremely disturbing. He visited the community along with Chang; the police commissioner; Custos of Westmoreland Hartley Perrin; and the Mayor of Savanna-la-Mar, Bertel Moore.

"Murder is on the rise in Westmoreland, but this is extremely disturbing," said McNeill, who noted that there was a 40 per cent increase in murders in the parish. "This cannot continue, and I am ready to support any measures that will put an end to this madness."

"It is a bad situation. Even kids are being killed," said Anderson in responding to the tragedy. "It is not unique to Westmoreland. ... There is no shortage of the guns that they have, no shortage of ammunition, and no shortage of the will on their part. Our response has to have equal resolve. We have to be agile as they are."