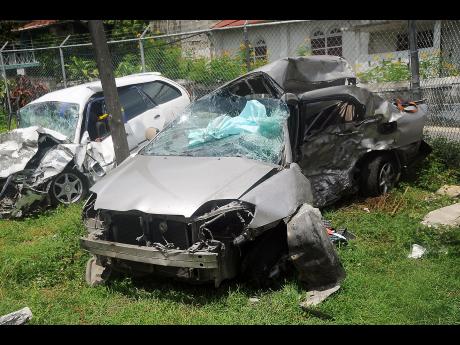 Photo by Adrain Frater Smashed up cars from Hanover fatal traffic accident in Hanover on Monday, May 21, 2018.

It was literally a case of 'speed kills' along the Hopewell main road in Hanover on Sunday night as all five occupants of a Toyota Corolla motor car died instantaneously in a horrific crash that left the two occupants of another car badly injured.

"It was a terrible accident, and from all indications, it was as a result of speeding," reported Superintendent Sharon Beeput, the commanding officer of the Hanover police. We are trying our best to discourage motorists from speeding, but they are not listening."

The deceased persons, four men and a woman, who were reportedly heading home from a party in Negril, are all from Green Pond in St James. They were identified as Nicholas French, Joseph Brown, Phillip James and Jovian Morris, who range in age from 25 to 30 years old. The woman has been identified as 26-year-old Onique Whitter of Hendon, Norwood.

According to reports, at approximately 10:14 p.m., the ill-fated car, which was travelling at a high speed, drifted into the path of an oncoming Toyota Corolla station wagon, which slammed into the left side of the vehicle, leaving it a mangled wreck. The front of the other car was extensively damaged.

"It was terrible. You could hear the crash from a mile away," said a man who witnessed the accident from a gas station some 100 metres away. "It is just the mercy of God that the people in the station wagon were not killed also."

The two persons in the station wagon, a middle-aged man and his common-law-wife, were trapped in their car and had to be cut free by firefighters, who had rushed to the scene.

"We have to be thankful to the firefighters, who got to the scene quickly and helped to free the two survivors who were trapped in their car," said Beeput. "Based on what happened, they were very lucky to escape with only injuries."