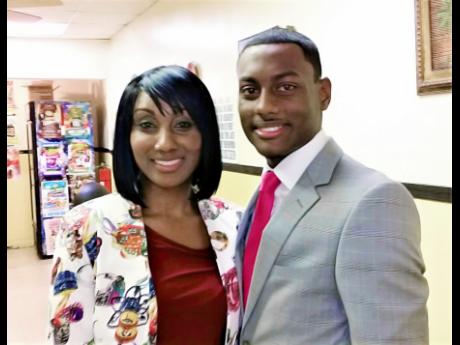 Xaundre Mohansingh, 20, is a Jamaican youngster from Vere in Clarendon. He's a graduate of Glenmuir High School in May Pen and he's currently an outstanding, high-achieving medical student at the University of the West Indies (UWI), Mona.

Xaundre recently spent a week with his mother, Lilymay Henderson, a nurse, who lives in Roselle, NJ, before heading off to Costa Rica for a cultural exchange. The passionate and very articulate third-year medical student is taking a two-week break from studies in Kingston to connect with young people in that Central American country to share aspects of Jamaica's fascinating culture with them. He joins eleven other students and two chaperons from the Office of Student Services & Development at the UWI for an exchange with the University of Costa Rica.

But Xaundre is not your average medical student at the UWI. He is on the dean's list for his outstanding academic performance in the Faculty of Medical Sciences, and he is also the 2018 recipient of the annual SSDM award for overall excellence and exemplary leadership at the Elsa Leo Rhynie Hall at the UWI. He plans to become a cardiothoracic surgeon, and he looks forward to many years of rewarding work in Jamaica to modernise and enrich the medical system in his homeland. However, his immediate focus is on Costa Rica.

"I am very much looking forward to spending time in Costa Rica", Xaundre told The Gleaner. "While there, we will share our fascinating culture; do songs, dances, and PowerPoint presentations on Jamaica; and we will learn from the Costa Ricans as well," he stated.

While Xaundre's mother is happy to see her son broaden his cultural horizons, she bemoans the reality that she doesn't get enough time to spend with him because of his very hectic UWI schedule and her busy schedule, too, working to send two kids to college back in Jamaica. The doting mom is already looking forward to Christmas when she will once again get some quality time with her only son.