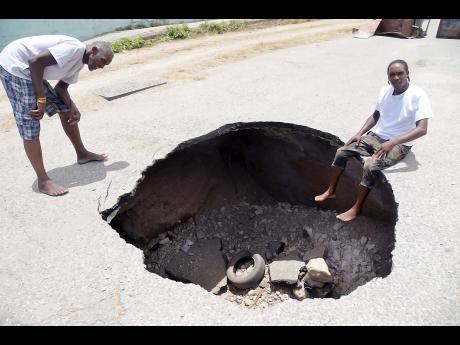 Taxi drivers and some residents of August Town, St Andrew, are unhappy with the pace at which authorities are repairing a massive hole in the middle of University Road in the community.

Just under two months ago, a section of the roadway collapsed, forcing motorists to use an alternative road.

The taxi drivers, who operate on the August Town to Papine route, claim that they are being seriously impacted and that the alternative route through Mona Road is inconvenient and costly.

"This a tek too long fi fix. This is a massive hole, and it need fi deal with now. As a youth, a hustle wi a hustle, and dem lock off the road and seh wi mustn't drive pon it. Police patrol regular fi give ticket to anybody dem catch driving on it.

"Right now, is much better wi drive here because dem say no taxi must pass through the University of the West Indies. We want to stop driving through the university, but fi drive through Mona, it too far. The road stay so because water dig it out. When the next set of rain come, round yah so ago tear weh," taxi operator Kevin Irving told The Gleaner.

Yesterday, Venesha Phillips, councillor for the Papine division and People's National Party caretaker for the Eastern St Andrew constituency, urged motorists to stop trying to make their way around the collapsed area of the road.

"We have been stepping up enforcement. It is a fact that drivers are still attempting to use the sidewalks because they believe it is easier or quicker to travel on. They do not realise that the entire [area] underneath has been compromised. They are driving on what is just a frail piece of assorting. I am urging them not to drive there," said Phillips.