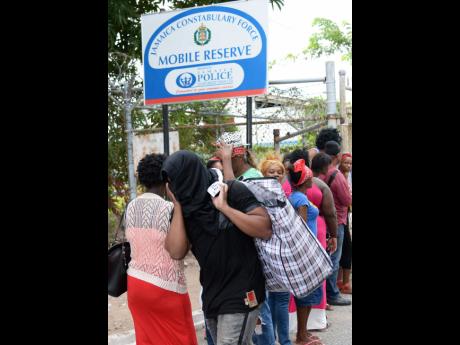 Jermaine Barnaby
In this September 2016 photo, a Jamaican deportee from the United Kingdom leaves the Mobile Reserve police post in St Andrew, while family members and friends look on.

The number of Jamaicans deported back to the island declined sharply last year, with almost half being sent home for having overstayed their welcome in foreign lands.

The 2017 Economic and Social Survey of Jamaica (ESSJ) released by the Planning Institute of Jamaica last week showed 1,393 persons were deported to Jamaica for the year.

The ESSJ noted that 80.3 per cent of the deportees last year were males.

Just under 50 per cent of the Jamaicans deported were found to have overstayed the time they were allowed in the foreign lands, had entered the country illegally or were guilty of an illegal re-entry.

Drugs infringement was second on the list of reasons Jamaicans were deported, accounting for 26.1 per cent of the deportees.

"However, a destination country analysis showed that involvement in criminal activity was the main reason for deportation from the United States of America and England, with 78.6 per cent and 53.7 per cent, respectively," read the ESSJ.

The survey also revealed that last year, 250 persons were deported from the United States for possession of drugs, 29 for firearm-related offences, and 44 for murder, manslaughter or attempted murder.