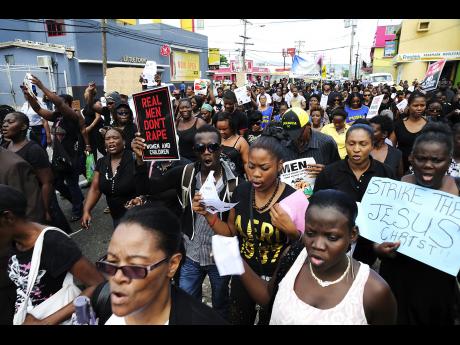 Ricardo Makyn
In this 2012 photo, persons walk through sections of the Corporate Area to call for an end to violence against women and the rape of children.

Twenty-seven children under 10 years old were raped across Jamaica last year as cold-hearted adults continued to steal their innocence.

They were among 261 children reportedly raped during the year, with the children accounting for more than half of the 470 rape cases recorded by the police.

The figures are contained in the 2017 Economic and Social Survey of Jamaica (ESSJ) released last week by the Planning Institute of Jamaica.

Seven women over 60 years old are also included in the rape number.

For Joy Crawford, founder of the female empowerment group Eve for Life, the age disparity of the victims underscores that gender socialisation is one of the root causes of incidents of rape in Jamaica.

"If you correlate that survey with the women's health report, they show the perception of women themselves about the roles and the power that are given to men.

"There is also a lack of empathy when we are to respond to what happens to our girls," added Crawford, as she charged that there are children who are being molested by the men with whom they live, while the women in the households turn a blind eye.

The ESSJ reports 1,644 homicides last year, up from 1,351 in 2016, the fourth consecutive year that the country's murder total has climbed.

But the Reverend Lenworth Anglin of the Church of God in Jamaica said despite the high crime rate, he remains faithful that a change is happening in Jamaicans' reaction to serious crimes.

"The matter of crime and violence in Jamaica is really multifaceted. We have always known what are the causes, but we lacked the will to do some of the things to effect change," said Anglin.

"I sense, however, that there is a change in approach in Jamaica. I think there is a frustration that has been growing at all levels, and I think now that some steps are being made," added Anglin.