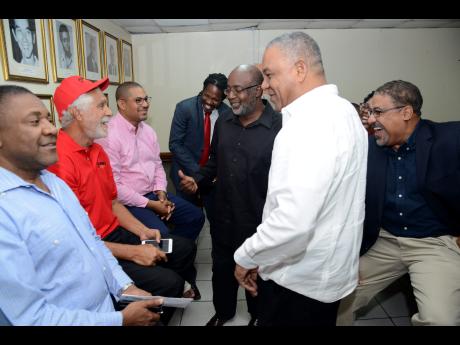 Rudolph Brown
The race is now officially on for the four PNP vice-president posts, and last Friday the six candidates shared a a laugh with senior Comrades, (from left) Phillip Paulwell, Dean Peart, Mikael Phillips, Damion Crawford, Fitz Jackson, Angela Brown Burke, Wykeham McNeill and Horace Dalley, at the signing of the Code of Conduct for the election.

Approximately 3,000 delegates should be on the voters' list when the People's National Party (PNP) elects its four vice-presidents come September 15.

Last Friday, PNP General Secretary Julian Robinson told The Sunday Gleaner that a preliminary voters' list has been given to the candidates and the number of delegates may vary in either direction but not by much.

"The draft list has 3,087 delegates. We are providing the draft list to the six candidates and their team now. They will have an opportunity to peruse the list to identify corrections, omissions, etc, and to come back to us with those, and then we will use the information to prepare a final list," said Robinson.

The majority of delegates are selected from the registered PNP groups in each constituency. Groups in good standing are awarded delegates based on the number of members they have.

The six candidates last week signed a Code of Conduct and were warned not to bring the party into disrepute over the campaign period.

According to Robinson, the party will be monitoring the actions of the candidates,

who are also responsible for the conduct of their supporters and surrogates.

"We are doing it two ways. Proactively, we have members of the secretariat who will monitor the official social media accounts of the candidates, and we have asked them to provide that.

"And we also know that candidates have supporters, and we are also monitoring posts, so if there is something which is derogatory put up about a particular candidate, we are going to be proactive in indicating to the persons that it brings the party into disrepute," said Robinson.

Chairman of the internal electoral monitoring committee, Senator Donna Scott Mottley, said she has no reasons to believe the campaign will become sour, but she made it clear that candidates will be held responsible if their supporters embarrass the party on social media.