Frightening for females - Human trafficking in Jamaica: Women the main victims and the main perpetrators 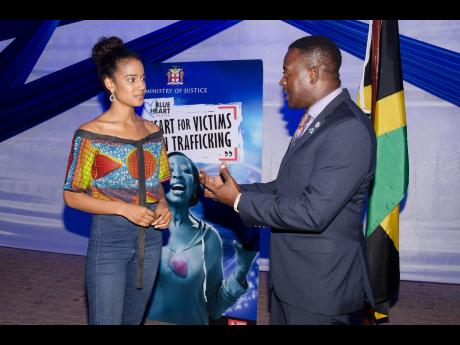 The recent sentencing of Oshin Morgan to more than four years in prison after she pleaded guilty to trafficking in person charges has underscored the findings of the Situational Analysis of Human Trafficking in Jamaica 2018 study, which found that women are becoming more and more the traffickers in Jamaica.

The study found that desperation, greed, and the fact that women are seen as being more trustworthy are some of the factors contributing to Jamaican females assuming a dominant role in human trafficking, which is the movement of people by way of fraud, force, or coercion in order to exploit them.

The recently released study covered 2010 to 2017, and showed that there were more females charged with trafficking than men. Most of the cases which involved women as traffickers saw them trafficking other women and girls for sexual exploitation.

Children's Advocate and Jamaica's National Rapporteur on Trafficking in Persons, Diahann Gordon Harrison, said what they have been seeing is that the traffickers were not necessarily having intercourse with these women, but they were operating a business, where they offer the services of those whom they have recruited.

"One of the cases that led to a conviction was one where a woman, who was very much in business with her male partner, was benefiting from the proceeds, that involved a nightclub.

"Girls were recruited to perform these particular acts, so what we are seeing is not that the traffickers themselves are having sexual intercourse with these women, but we see where they are operating as a business," said Gordon Harrison.

That view was supported by sociologist and head of the Institute for Gender and Development Studies at the University of the West Indies, Dr Leith Dunn, who said the women used their gender to connect with their victims.

"Some people would say traffickers are maybe using them or they may allow themselves to be a part of the whole trafficking process knowingly, because they are less likely to [draw] suspicion, depending on who is being trafficked.

Jamaica has so far seen four human-trafficking convictions with women being the traffickers in two of the cases.

The study also found that Jamaican women have been arrested, charged and convicted of trafficking in other countries, including Antigua and The Bahamas.

The study recommends that stakeholders should intensify awareness campaigns targeting children, to warn them of the potential danger and to be wary of females who can also be potential recruiters or traffickers.

"It's the reality that we face, and we have to be extra vigilant. This issue about 'stranger danger' will lure our children into a sense of complacency, if it's an adult you must respect that adult so if they say 'come here' you should just go, it's not just strangers, it could be someone you know.

"Have those conversations that danger can come from the aunties, the cousins, the relative you send them to stay with," said Dunn.

Gordon added that the target message she would like to see is one that includes that a trafficker can be anybody.

"One of the messages going forward should be that this is not a gender-specific crime or a gender-specific person, who is a potential trafficker, but let's look at the type of arguments or the type of scenarios being put towards you. If it is that it's too perfect an opportunity, that is really a red flag that should cause prospective employees to do further checks," said Gordon.

- Trafficking primarily involves exploitation which comes in many forms, including forcing victims into prostitution, subjecting victims to slavery or involuntary servitude, and compelling victims to commit sex acts for the purpose of creating pornography.

- According to some estimates, approximately 80 per cent of trafficking involves sexual exploitation, and 19 per cent involves labour exploitation.

- According to the American State Department, 600,000 to 800,000 people are trafficked across international borders every year, of which 80 per cent are female and half are children.

- Human trafficking is the third largest international crime industry (behind illegal drugs and arms trafficking). It reportedly generates a profit of $32 billion every year. Of that number, $15.5 billion is made in industrialised countries.

US State Department 2017 recommendations for Jamaica

- Vigorously prosecute, convict, and punish traffickers, including any officials complicit in sex or labour trafficking.

- Continue to support victims during the criminal justice process whether the victim resides in Jamaica or abroad to ensure the admissibility of testimony.

- Implement the national rapporteur's mandate to investigate reports of human trafficking, report on violations of the rights of victims, and provide an annual report to the Government.

- Continue efforts to raise awareness about human trafficking of both Jamaican citizens and foreign nationals.