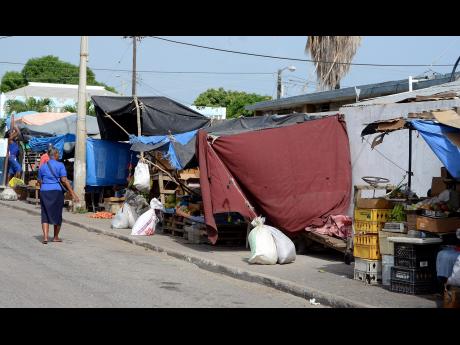 Kenyon Hemans
A resident walking on the road to get past the street-side market on Seashore Place in Harbour View, St Andrew. 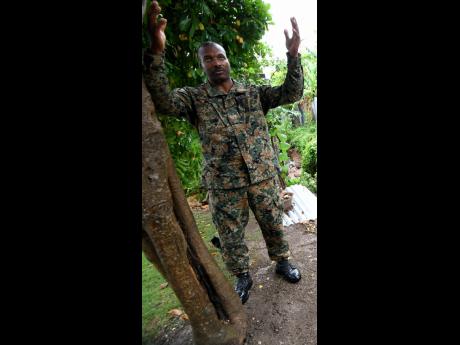 There is bubbling contention involving some residents of Harbour View and vendors who have established a market outside the Shoppers' Fair Supermarket compound in the eastern St Andrew community.

According to president of the Harbour View Citizens' Association, Orion Archat, the illegal vending is causing problems along Fort Nugent Drive and Seashore Place, and the inconvenience is becoming increasingly unbearable for residents.

"The problem is twofold: the vendors on Seashore Place are causing a problem because they are unregulated. The community had accepted the fact that these vendors were providing a service, but there was a limited number of vendors at the time," Archat told The Sunday Gleaner.

He said for decades only a handful of vendors operated at the location and they were not in front of any of the houses.

Archat said these vendors were embraced by residents who found them convenient, but the number has increased with the vendors many of whom are not residents of Harbour View now taking over the area.

"The illegal vending on Fort Nugent is a problem. It robs the residents of the use of the sidewalk and it is also in the front of homes. Now what you are finding is people creeping in with gas cylinders, trucks, and it takes away the sidewalk and the whole aesthetics of the area," added Archat.

He argued that it is unfair to homeowners who have to contend with the disorderly scenes, traffic jams caused by motorists who park near the sidewalk to buy goods, and garbage left behind by the vendors.

Archat said one woman broke her leg while navigating the sidewalk littered with goods for sale, and the Kingston and St Andrew Municipal Corporation (KSAMC) needs to take steps to bring order to the area.

Another Harbour View resident, who asked not to be named, described the area as a mini-coronation market on weekends, as she charged that some vendors provide chairs for their customers who are waiting to be served.

"Now jerk vendors have joined the market on Fridays and Saturday nights, so it is getting bigger. Pedestrians have to walk on the street since that whole bloc of sidewalk is cut off," said the resident.

But vendors who spoke with The Sunday Gleaner last week claimed they have been occupying the premises for years and that only a handful of residents are "giving them a fight".

"I have been out here more than five years. I have my house in Harbour View, I pay my bills. We can't make a few people jeopardise our livelihood," she added.

An elderly female vendor on Seashore Place argued that those opposed to their vending were only being unfair.

"They always come with their old-time story that they don't like the setting and how the place stay, and sometimes they come and burn out some people stall. They want to keep their friends and people who they like and get rid of other people," she charged.

Efforts to get a comment from the KSAMC have so far been unsuccessful.