Sue them! - Lawyers advise motorists to take action if their vehicles are damaged while being towed 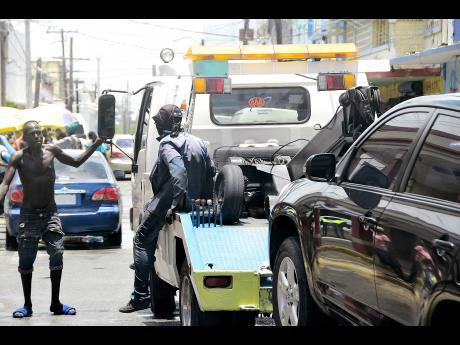 Motorists whose vehicles are damaged while being removed by wrecker operators are being encouraged to seek legal recourse for the damages.

Veteran attorney-at-law Bert Samuels and his younger colleague, attorney Jason Jones, last week agreed that the municipal councils, and the wrecker companies they employ to tow vehicles, are obligated to ensure that the vehicles are handled with care during the process.

"Although you are parked in violation of the law, they still have a duty of care to make sure your vehicle is in good condition, the very condition in which it was when they lifted it," Samuels told The Sunday Gleaner.

"So you have an action against the Kingston and St Andrew Municipal Corporation (KSAMC), and if you know the particular companies being employed by the KSAMC you can join both of them in the lawsuit and both of them would be responsible," added Samuels.

He argued that the municipal corporation has a duty to ensure that it employs professional wrecker companies.

According to Samuels, he handled one such case in which a motorist's vehicle was damaged while being towed away. "That was settled out of court. When we wrote to the wrecker company they paid without us going to court. But the principle is there."

For his part, Jones is urging motorists to have their vehicle assessed by a professional mechanic before they seek legal action.

"After getting an assessment, they can bring a claim against the relevant authority for damage to the vehicle, and also any expenses incurred as a result of the vehicle being damaged," said Jones.

"So if they didn't have the vehicle to use for a while they can claim for loss of use and also expenses paid to fix the vehicle," added Jones.

Last week, the operator of a company which offers wrecking services, who asked not to be named, told The Sunday Gleaner that his workers are trained on how to carefully remove vehicles.

"I don't know about others, but our staff members are trained, and if someone has a claim that their vehicle is damaged while being towed, we are willing to get to the bottom of it," he said.