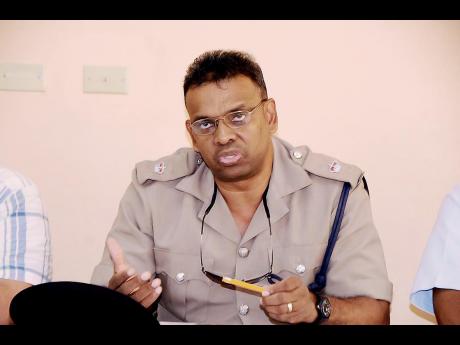 The St Catherine South police are basking in the quality of cases they have put together in recent months, which have resulted in multiple convictions.

Head of the division, Senior Superintendent Clive Blair, told The Sunday Gleaner that there has been a massive push to produce airtight cases, and this has led to six convictions for illegal possession of firearm up to July.

According to Blair, the cops are not only arresting persons found in possession of guns, but to present evidence to lead to their conviction.

"I must laud the efforts of the investigators and the special operations team who worked in conjunction with the Counter-Terrorism and Organised Crime Branch to carry out these arrests and, ultimately, convictions.

"Winning courtroom battles are of utmost importance to show that the system works," said Blair in the wake of the recent sentencing of Javaine 'Gavin' Harris, who is to serve five years for illegal possession of firearm and ammunition after being first arrested and charged in October 2014.

Harris was charged after a firearm was seized during a shooting, which also involved another man, later identified as Andre Love.

It was reported that members of a police team were on patrol when Harris pulled a gun from his waistband and threw it into a churchyard. The gun was recovered by the police and he was arrested and charged.

Love fled into an open lot and engaged the cops in a shoot-out before escaping. He was later held and charged with shooting with intent and illegal possession. His matter remains before the court.

Harris had pleaded not guilty and was granted bail in 2015, but he changed his plea when the matter came up for trial late July.

According to Blair, hard work and resilience by the investigators led to Harris' eventual guilty plea as one of six convictions in a relatively short time.

"In another instance, we have had Akeem Lambert, who also pleaded guilty and was convicted of possession of a shotgun, an offence committed in November of last year, now awaiting sentencing," said Blair, who listed a number of other persons convicted in recent months.

He also called for extra penalties on conviction for persons found guilty of trafficking guns and ammunition across parish lines.

Blair argued that this should be part of efforts to tackle the drugs-for-guns trade, which has plagued the island for years.