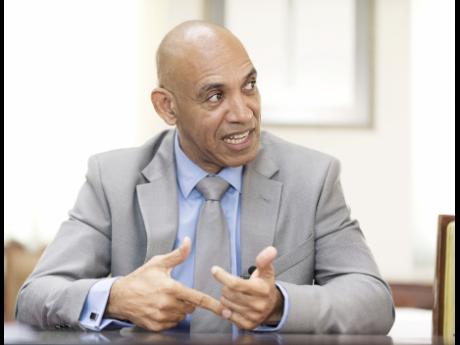 Police Commissioner Major General Antony Anderson says the full implementation of body-worn cameras by members of the Jamaica Constabulary Force (JCF) remains among his priorities, but there are several issues still to be addressed.

Speaking during a Gleaner Editors' Forum last Thursday, Anderson underscored that body-worn cameras are part of improving the accountability in the force, and argued that they would be important tools for the men and women under his command.

"I've said to the officers, 'If you don't have a body camera, you are the only one at the scene who doesn't have a camera'," said Anderson a day after launching the Public Safety and Traffic Enforcement Branch (PSTEB), which is part of efforts to bolster public confidence in the police force.

Anderson added that he has told the cops: "Everybody else has a camera and they will be filming. But they will film what they choose, and usually it is what you did and not why you did it. The body camera is the biggest thing for officer protection."

He admitted that the force does not have enough cameras for all 19 police divisions, but argued that this is being addressed.

According to Anderson, in addition to the 120 body cameras given to the JCF by the United States two years ago, cameras were purchased to be used in the zones of special operation, while more have been ordered.

He pointed out that with the planned full implementation of the body-worn cameras, critical consideration must be made to the logging and storing of information from them, their maintenance, and how, and to whom, would the information captured be shared.

The commissioner also noted that the standard uniform worn by members of the JCF is not made to accommodate a body camera.

"So if you put it on, as soon as you begin to move it is not focused properly because they are on a little shirt that predates body cameras by decades," said Anderson.

He noted that the high-visibility vests worn by members of the PSTEB are designed with accommodation for the cameras.

"We are also looking at uniform modifications to see how we can start getting technology into police uniform ... our uniform predates cellular phones, they predate all of the things that you see these days, and everybody is trying to hang things on themselves."

Anderson told Gleaner editors and reporters that JCF resources will be switched around to ensure that members of the PSTEB have access to body cameras as well as non-lethal options such as pepper spray and electroshock weapons (tasers).