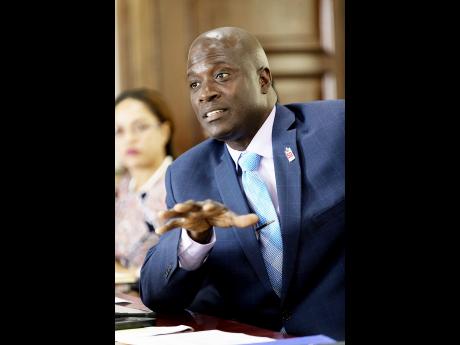 Head of the police Criminal Investigation Branch, Acting Assistant Commissioner McArthur Sutherland, is satisfied that the police have been making strides in removing known gunmen from the streets, despite a heavy caseload carried by detectives.

"We have really launched an assertive approach around arresting persons who commit murders and shootings. We believe that we can, with evidence, arrest persons who give you an average of three, four shootings per month. We can put court-ready files together and move them from the streets. It will impact the murders out there," argued Sutherland, who was among members of the Police High Command who flanked Police Commissioner Major General Antony Anderson at a Gleaner Editors' Forum last Thursday.

"So we are making efforts, in a major part of the strategy, to remove the active gunmen from the streets so they won't be able to kill somebody else," added Sutherland.

He noted that in some instances, one detective may end up probing as many as 24 cases at a time, which could impact the quality of cases put to trial.

"We have a structured case management system for the 19 geographical divisions, which is like the quality control department that ensures that we have as much as possible, an equitable distribution of the caseload. But notwithstanding, you will have some investigators carrying more cases," said Sutherland.

Anderson is well aware of the heavy workload of his detectives, and that is one of the several factors driving him to drastically reduce the country's murder rate.

"The reality is that at no point can you say, 'OK, well this murder we won't bother with because we have met our quota', and there is only so much time you can spend on each file and so many hours in the day," said Anderson, as he noted that the present clear-up rate of an average 50 per cent over the last four years would increase dramatically if there were fewer murders.

"A murder here is like a murder anywhere else. You are going to expand your investigative staff, and normally in most jurisdiction they have a team that deals with each murder, usually about five detectives on a team," said Anderson, as he underscored the size of the task facing local police investigators.