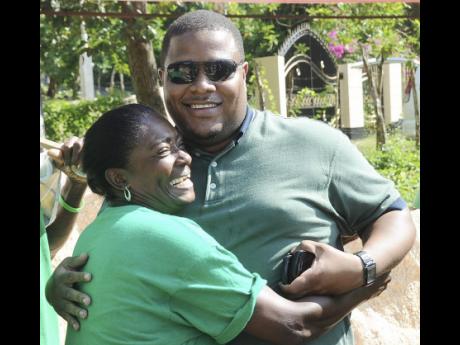 Ian Allen
In this November 2011 photo, then JLP candidate for South Manchester, Colin Virgo gets a hug from a supporter.

Former director of the HEART Trust/NTA, Colin Virgo, has rejected the findings of an internal audit which raised concerns over the $387,000 he had been paid in travel expenses for the nine-month period from April 1, 2016 to December 31, 2016.

Virgo had been paid $1.2 million for travel for the period, but the internal audit found that a portion was not justified.

Late last week, Virgo told The Sunday Gleaner that the report was done without the benefit of a single audit query or request for clarification from the parties involved.

"As subsequently proven, had this been done, it would have prevented the report being submitted with its many inaccuracies," said Virgo.

The audit was conducted at the request of the then chairman of the board of the HEART Trust/NTA, based on concerns expressed by an anonymous source.

He found that while Virgo was paid $1.7 million for the period, just 27 per cent ($445,000) related to meeting fees with the rest being for travel.

But travelling is only paid on the basis of attendance at board meetings, subcommittee meetings, corporate events, or board-related activities.

According to the report, dated January 2017, Virgo was overpaid approximately $249,000 based on checks of the mileage he claimed, and a further $138,410 for claims on multiple round trips despite the provision of hotel accommodation, in contravention of established policy. In addition, he was paid a further $14,000 for a meeting he did not attend.

Responding to The Sunday Gleaner, the former Jamaica Labour Party candidate said that subsequent discussions and an examination of its contents easily justified, clarified, and invalidated nearly all the issues raised.

"For example, instances where it was suggested that I claimed for meetings I did not attend were all clarified. In those cases, the justifications ranged from instances where the minutes confirmed that I was in fact present, to instances where I turned up but the meeting was eventually cancelled or not recorded in the usual manner for reasons such as lack of a quorum," said Virgo.

He added that the matter was discussed and settled more than 18 months ago and is being rehashed now for nefarious reasons.

"Though it is a lot of work, I don't serve for fees. My service to my country is well established from I was just a student in school. I served many other public and private boards and organisations that do not compensate for meetings or travel.

"Despite the fact that serving in those instances are at a high cost to me, all my colleagues can confirm I never miss meetings or activities unless overseas," said Virgo.