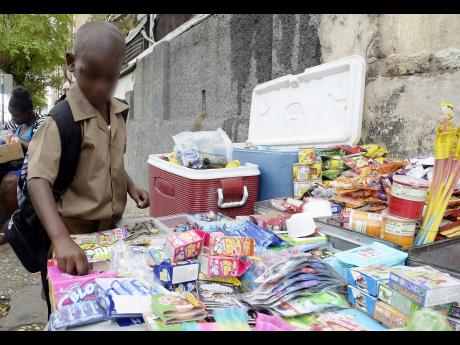 Lionel Rookwood
A young schoolboy buys sweets from a vendor outside his school.

The Ministry of Health's efforts to eliminate sweet drinks and other sugary products from schools could be stymied by the scores of vendors outside school gates despite several declaring their support for the plan.

For the start of the new school year last week, The Sunday Gleaner visited the entrances to several schools where the almost uniform response from vendors was that the students are not buying healthier options, which in many instances are more expensive.

"If I can't sell the sugary drinks, I would try to sell more of the fruit juice, but it dearer (expensive) still," said vendor Adassa Ross.

The 57-year-old, who lives in Kingston, has been a school-gate vendor for more than 25 years.

She said she used to sell on the property of the St George's Girls' Primary and Infant School on Duke Street in downtown Kingston, but over time she was removed, and now operates from a stall outside the school gate.

Ross sells mostly chips, biscuits, juices, books and pencils and bagged water. She said even though some children buy the water it is not as fast a seller as the sweet bag juice.

She pointed out that she was able to send three children through high school, and now sends her grandchildren from the money she makes as a vendor.

Ross noted that the children who buy from her love the bag juice, which is sold for $20 while fruit juice is sold for $100.

"But let me tell you, you see the juice them say have the whole heap a sugar, it no have in the amount a sugar like one time. Is like the factory them a cut down on the sugar in the drinks them," said Ross.

Betty has been selling for more than 15 years close to the Holy Trinity High School, also in Kingston.

She told The Sunday Gleaner that her biggest crowd sales after school are in season fruits which sell quickly, and she tries to always have a few on hand.

According to Betty, she has already been warned not to sell sugary drinks to the children.

"Them warn me that certain things. not supposed to sell, like the bottle drinks and the bag juice because of the whole sugar thing. Me buy the water but it no sell hard, me sell it fi $80 a bottle and $10 for it in the bag, the bag juice go faster than them because you know some parents don't have the money to give them to buy the bigger juice.

"So if them say me not to sell the bag juice that would lick me hard," said Betty.

Another vendor, Aunty Sue, who sells in the vicinity of St Joseph's Infant School, agrees with the position of the health ministry even though she has snacks and sweet juices on her stall.

"Me no find no fault with what the Government a say, because it is better for the children health. Still, whatever you have is that the children have to purchase. So if them no see the juice them nah go buy it but if a water you have a water them a fi go drink," said Aunty Sue.

Minister of Education Ruel Reid said the municipal authorities will have to look at how they regulate vendors at school gates.

"We are not saying we want to get rid of our vendors; we also would have to reach out to them as a community to educate them. We want to encourage them to sell and procure very healthy products," said Reid.