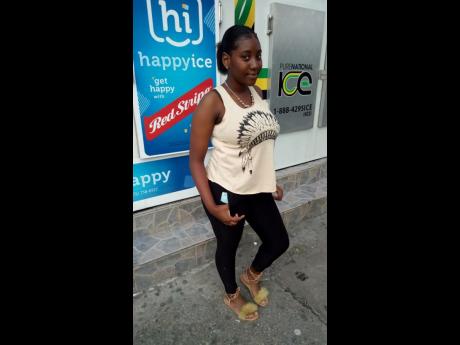 Tears flowed at Herbert Morrison Technical High School in Montego Bay, St James yesterday as the school family - including the Parent-Teacher Association (PTA), Past Students' Association (PSA) and friends of the school - came together to mourn the brutal killing of 16-year-old Jayshenel Gordon, a grade 11 student.

Gordon and her 45-year-old mother, Deon Smith, a service station supervisor, were murdered at about 2:15 a.m. on Sunday at their home in Rosemount,

St James. The brutal act was allegedly carried out by Smith's common-law husband, Fabian Lyewsang, who subsequently committed suicide by driving a car into the Rio Cobre in St Catherine.

Yesterday, Paul Adams, the principal at Herbert Morrison, hailed young Gordon, who was making her mark at the school through sports and student leadership.

"She was a quiet student but involved. She was involved in netball and she was one of the class leaders," said Adams, whose usual flamboyance was absent as he reacted to the grief around him.

The principal said that while the entire school was in mourning, the students in Gordon's class took her killing extremely hard, as even the boys were crying openly.

"It is a tightly knitted class. These students are very close as a team. The courses they do, they do it together," said Adams. "She is sadly missed."

When The Gleaner visited the school yesterday, there were very few dry eyes on the compound, as even persons who came in to offer support found it difficult to hold back tears.

"We have quite a number of persons assisting us with counselling sessions and other support," said Adams. "We have the Ministry of Education Guidance Unit, we have a lot of past students, some of whom are in the pastoral field. We have a lot of parents and other people who always support Herbert Morrison. We are not short on public support and we are very, very happy for that."

Denzil Dixon, guidance counsellor for the upper school at Herbert Morrison, described Gordon as a calm, polite and well-organised student who was focused and committed.

"She was somewhat of a model student, based on her overall behaviour both in and out of class," said Dixon. "The students who were close to her have taken it quite hard, and as you can see, there is much grieving at this time. Thankfully, we are getting professional help."

In Gordon's home district, where she was greatly admired, residents are still in shock about the brutal double murder, which was reportedly sparked by jealousy.

"Him (Lyewsang) always a seh she (Smith) a gi him bun, but me neva know seh him woulda tek it to such a level," a resident shared.