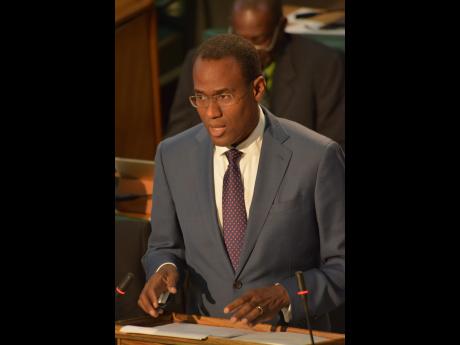 Another $445 million is being allocated to the Jamaica Constabulary Force (JCF) to fund, among other things, the various security measures imposed by the Andrew Holness administration to stem the country's murder rate and restore public order in town centres across the island.

Further, the Government now plans to allocate $7 billion to local authorities to pay current and outstanding charges for street lighting; $1.7 billion to the National Housing Trust to settle outstanding arrears in employer contribution owed by public-sector entities; and more than $500 million to help clean up the voters' list by removing the names of deceased persons.

At the same time, the administration has proposed cutting just over $1.4 billion from the $3.6 billion that had been set aside to fund the Southern Coastal Highway Improvement Project, an ambitious undertaking through which approximately 110 kilometres of roadway between Harbour View in east Kingston and Port Antonio in Portland is to be rehabilitated.

IT IS A START

The revised spending was included in the First Supplementary Estimates for the current fiscal year, which was tabled in the House of Representatives yesterday by Finance Minister Dr Nigel Clarke. It projects an $18-billion increase in the 2018-2019 Budget, with just over $11.2 billion of that amount going towards recurrent or housekeeping expenses.

According to the First Supplementary Estimates, the Government now plans to spend $791 billion this fiscal year, compared to the $773 billion that was projected when the Budget was passed in March.

The estimates will be reviewed by the Public Administration and Appropriations Committee, as well as the Standing Finance Committee of Parliament before they go to the House for approval.

The increased allocation to the JCF includes $235 million to support the Government's two main anti-crime measures, the states of public emergency (SOPEs) and zones of special operations (ZOSO), and $80 million for the new police formation, the Public Safety and Traffic Enforcement Branch.

Since the start of the year, SOPEs have been imposed in St James, the St Catherine North Police Division and, since Sunday, across the St Andrew South, Kingston Western and Kingston Central police divisions. The St James community of Mount Salem and the west Kingston Denham Town community have been declared ZOSOs.

The JCF has also been allocated $130 million to improve 60 priority police locations islandwide.

Late yesterday, the parliamentary Opposition, which has been clamouring for a re-verification of the voters' list, described the $527 million allocated in the revised Budget "a start".

Julian Robinson, member of parliament for St Andrew South East and general secretary of the People's National Party, estimates that the names of up to 300 deceased persons could still be on the list.

"It is something that we welcome. While it's not fully what we advocated for, we believe it is a start, and it will assist in taking those dead persons off the list," Robinson told The Gleaner.