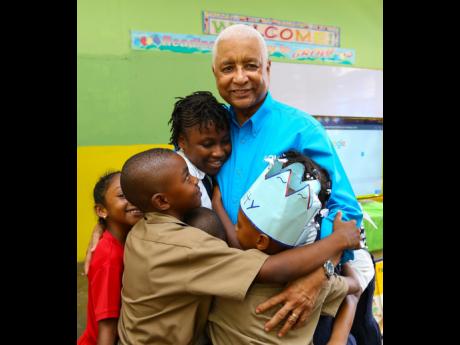 The FLOW family is extremely saddened by the passing of Errol 'E.K.' Miller, executive chairman of the FLOW Foundation and government liaison on Monday.

Miller passed while being treated at the Intensive Care Unit at the University Hospital of the West Indies for a medical condition.

"This is a significant loss, not just for our company and foundation, but also for the many organisations that E.K. selflessly served. He was much more than a team member; he was our friend, confidant, adviser, and more to many of us. This is a sad day for Jamaica, but we take solace and pride in the incredible legacy that he leaves behind," said Stephen Price, FLOW managing director.

In a statement, FLOW said Miller played a critical role in charting the history of the company during the 31 years he served; having first joined in 1987 as public relations manager.

On his retirement later that year, he was appointed executive chairman of the company's Foundation, "a role that he transformed as he spearheaded programmes that made a great difference in the lives of many. This was a passion of his, as he steadfastly believed in the potential of others and relished the opportunity to mentor Jamaicans from all walks of life."

Hailing from humble beginnings, Miller was very passionate about the role that education could play in improving the lives of young Jamaicans and would always tell the many youngsters he would encounter that "through education and reading you can travel the world without leaving the shores of Jamaica".

In this spirit, Miller spearheaded numerous programmes that provided opportunities for promising students to attain success. Among them were initiatives such as the Internet in Schools Programme that continues to benefit some 400 primary schools across the island, as well as annual bursaries and scholarships for tertiary and needy students, including those living with sickle cell disease. Each year, he would also ensure that a trip to the Penn Relays in Philadelphia was possible for hundreds of student athletes, a venture he believed was important in broadening their horizons and allowing them to secure opportunities to study overseas.

FLOW said E.K. was also very committed to help to improve access to healthcare in Jamaica, both from an institutional level as well as for individuals struggling to afford the cost of treatment. His efforts with the Bustamante Hospital for Children resulted in the establishment of a Paediatric Cancer Fund that directly assisted needy families and annually, through the UWI Endowment Fund (UWIDEF), life-saving equipment was handed over to the University Hospital to the benefit of thousands.

In addition to his work with the FLOW Foundation, he served as a justice of the peace and was a member of the Lay Magistrates Association for Petty Sessions Court. Throughout his career, he also served numerous non-profit institutions, and at the time of his passing was a board member of the Multi-Care Foundation and INSPORTS.

Known for his quick wit and sharp humour, E.K. was well-loved and respected across all levels in the company and throughout the society. He was also regarded as a fount of knowledge by his peers in media and communication, both locally and internationally, and was often called on for advice. A humble yet strong gentleman, dedicated to his family both at home and work, E.K. will be greatly missed.

"Our heartfelt condolences go out to his widow Joylyn, his son and fellow team member, Stephen, other family members and friends," read the statement.

"May his soul rest in peace as we take comfort in the great memories that we will always have."