No fear of showers - Upbeat Labourites heading to annual conference 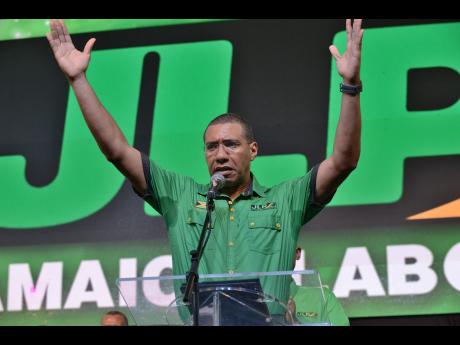 The weather forecast is for isolated thunderstorms across sections of the island today, but that will not stop thousands of Jamaica Labour Party (JLP) supporters who are planning to brave the 'showers' for their trek to the National Arena for the party's 75th Annual Conference.

JLP leader, Prime Minister Andrew Holness, is scheduled to give the main address at the conference against a backdrop of the lowest unemployment numbers in years, reducing crime numbers, and massive infrastructural overhaul of the country's road network.

Late last week, JLP Chairman Robert Montague told The Sunday Gleaner that there is no fear of the showers, and Holness will be paying tribute to those who built the party over the years and will be laying a foundation for the next 75 years.

"He is expected to outline the Government's achievements and how we have performed on the manifesto commitments," said Montague.

"I would rate the performance of the Government as an A-plus, but we remain cognisant that we exist in a rapidly changing political, business and technology-based environment. The party has to remain agile and flexible in order to treat with the needs of the electorate," said Montague.

In the meantime, Cabinet member Daryl Vaz, who operates out of the Office of the Prime Minister, said Holness will speak to the economy, jobs, crime, and give an overall report to the party and the nation.

"The JLP at 75 is a celebration of achievements and always doing what is best for Jamaica. We have a lot to be proud of, as we have always brought Jamaica from the brink, and through our policies we are focused on building a prosperous nation," declared Vaz.

"The leader will speak to what we have done as a party and what we will be doing in the coming year. Labourites are excited as the JLP are on top while the People's National Party is trying to catch up," added Vaz.

He would not be drawn into commenting on whether Holness will speak to the allegations of corruption and mismanagement being levelled at the administration.

"I expect the PM to continue to share his holistic vision for Jamaica and connect the dots to the journey to prosperity."

But gender advocate Nadeen Spence said there are several issues which Holness must address, including the accountability of public boards in light of the "accountability mess" that happened at the former Ministry of Energy, Science and Technology.

"The prime minister must speak to how we will create a more equitable society to spread the progress. The business indicators are good, the construction industry is doing well and there is significant improvement in the road network. All are very good and people are daring to be hopeful again," Spence told The Sunday Gleaner.

She argued that the prime minister must also paint the picture of how the development will respond to the nuances of everyday life, especially for persons in the rural areas.

According to Spence, Holness should also address the " appalling gender and wage gaps in Jamaica, as well as the advancement of sexual harassment legislation".