On the Corner | Music the tie that binds Drewsland 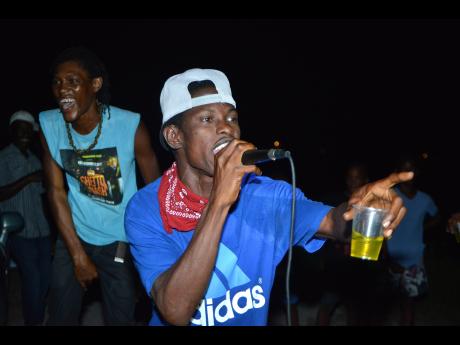 The cheers echoed across the nearby gully bank last Monday as residents of Davidson Avenue and its neighbouring streets in Drewsland jumped in excitement at the lyrical prowess of two young DJs from the community.

One of the DJs goes by the stage name 'Ever Strap', but he was christened Shawn Lewis, and he was quick to make it clear that his moniker refers only to his lyrical prowess and not the gun, which is sometimes referred to on the streets as a 'strap'.

The other DJ calls himself 'OWBG', and even as he participated in a Gleaner/RISE Life Management On the Corner forum, that was the name he wanted remember.

As the two DJs captured the attention of the crowd, residents declared that performances at that level were nothing new for them as the area has been a cradle for entertainers over the years.

They pointed to shows such as 'Ghetto Splash', which is held annually at the nearby Waterhouse Mini-Stadium, and said that culture unites warring factions from the area and provides a platform for its development.

"Is a lot of talent around here, man. See them here. All of them youths have talent. The whole of we drink and we smoke and we just kick back and hold a vibes every Sunday," said Ever Strap as he pointed to other DJs and selectors in the area.

"Ghetto Splash invent OWBG. Me open the show in 2014. It make me wake up with $3,000 the next morning because I was security. Me nuh do nobody nothing. Me just make them go in free," said OWBG to laughter from the gathering.

"Every year, you have youths who get work when Ghetto Splash keeps. Youths get security work, and other people get to sweep up the place, and so on. It provides a lot of employment for youths in the community - give them something to do," said 'Jason', another resident of the community.