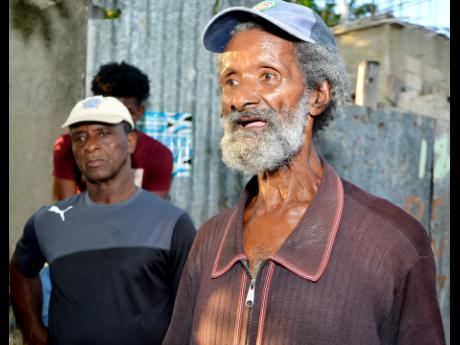 Kenyon Hemans
Vohan Clarke (right), and Clyde ‘Romie’ Duncan, share their concerns about the failure of the authorities to provide land titles to several residents of Drewsland. 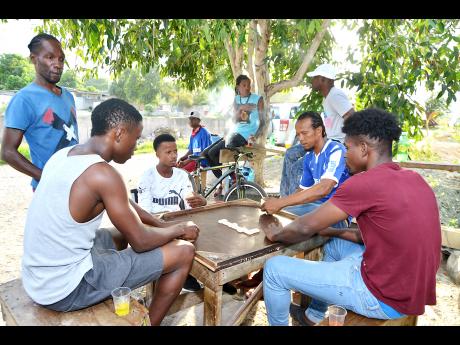 Kenyon Hemans
A game of dominoes was a lot of fun for residents of Drewsland who gathered at Romie's Corner last Monday.

Nearly four decades after they were promised land titles and started paying property tax, residents of the section of Drewsland near the banks of the Sandy Gully popularly known as 'Bottom Drewsland', continue to occupy their properties as 'squatters', unable to access some of the basic amenities that many Jamaicans take for granted.

According to the residents, they are in limbo as they cannot legally acquire electricity and water supplies as these services cannot be legitimised without there being a registered property owner.

Johan Clarke, an elderly resident of the community, told a Gleaner/RISE Life Management On the Corner with Unattached Youth forum on Davidson Drive, better known as 'Romie's Corner', last Monday that his ordeal began in 1972 when the community was beginning to take shape.

"I have been living here since '72 when it was the norm for lands here to be captured until the authorities came and cut it up into lots and put it in each resident's name," said Clarke.

He said that at the time, several meetings were held and the land was surveyed and parcelled for individual owners.

"More meetings were held, and we were told that we could start paying for the lots from that time until now. They said to us that we could pay down small instalments and that the first payment would have gone to the surveyor, and that is that we did. I paid off my own from 1983, but until now, no title, and I still haven't heard anything more," stated Clarke.

Another elderly member of the community, Clyde 'Romie' Duncan, told the forum that the residents are ready and willing to pay for services such as electricity and water.

Duncan charged that the residents are at a disadvantage because they have no proof of ownership.

"All of these people you see here don't have title for their homes. We need the Government to know that we need land titles. We don't have a proper electrical system, no legal water system either, so we need the authorities to come in and put in a talk and let the people know when they getting their titles," said Duncan, who has also been living in the area since 1972.

He charged that they have received countless promises from the authorities in relation to them finally getting their land titles.

"We paid for them already, so why is it taking them so long to give us our titles?

"You see those two lots there? All now I can't get a title. We want to put in the light and the water because we need proper lighting, and we can't get that. Every time the man dem come cut off the light, and yet still we can't apply for it legally because they not giving us the title, so how can we regularise our service?" questioned Duncan.

Another resident, 'Burru', was adamant that his neighbours want better than to be putting their lives at risk by illegally taking electricity from the Jamaica Public Service (JPS) Company's grid.

"People around here willing to pay fi dem things because you see this throw up thing and them come take it down, and we to go hook up light again, it's going to cost people dem life. And we nuh want that. So if we can pay for it good and we live clean, is that we want," declared Burru.

"It was last week Tuesday me and a friend had to climb a JPS pole to reconnect some wires because they came and cut it down. It could have cost my life. In the end, it cost my friend his life because we ended up a put on back people light, and he got electrocuted. Now him dead," added Burru.

The Drewsland residents say that their houses are already wired for electricity, but without proof of ownership, they cannot be certified to be attached to the JPS system.

"We really don't plan on stealing the light, but we have to. It's just how life is. We can't stay in the darkness because when a man run in pon you and you children and you wife, is how we going to manage when it is an already tough situation?" argued another resident.

Desperate for attention, the residents of the west central St Andrew community used the forum to call for help from their political representative.

"We need our political leaders - the member of parliament (Prime Minister Andrew Holness), the councillor - to come and see the plight we are living under. We need legitimacy, too," said one resident to applause from his neighbours.

Fellow resident Andre added: "The other day, I did a survey with the Red Cross, and the reason why some of the roads in Drewsland are this bad and are not being fixed is because we were told that Drewsland is not on the map. You get what me saying? So you have to be on the map to really get the roads fixed."