Weeded out! - Denied a job because of failed drug test, inner-city resident issues warning to his peers 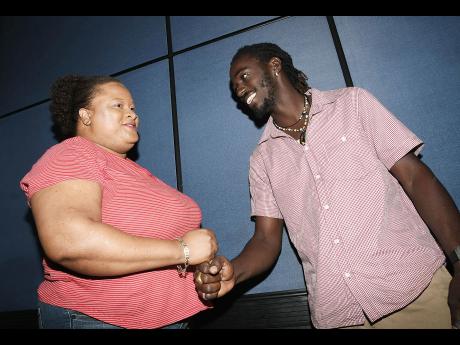 His dream is to make it big in music while operating the best natural smoothies joints across Jamaica.

But while he chases his dream, 'Elijah Bello' would like a steady income. He thought he had found one after acing an interview and providing proof of qualification for a job he had been introduced to through the Citizen Security and Justice Programme (CSJP).

But Bello saw the job offer disappeared in a puff of smoke after a drug test revealed traces of ganja.

Now Bello has a message for young Jamaicans who use the weed either as a recreational drug or as part of their religion.

"My experience is one that most youths could learn from as based on work opportunity, persons need to be aware of what they are doing with the weed," said Bello.

"I did the drug test and the doctor told me that I failed by only one bar, which means that it was in my system but I had stopped smoking. So she said 'go and detox and come back', and I love that opportunity to detox and go back for that job," added Bello.

He argued that several factors push youths across the island to smoke the weed.

"Based on the pressure in the inner cities, youths have easy access to a ganja spliff more than they have access to a plate of food," said Bello, as he warned that even persons who don't smoke but who are around persons who smoke could fail the drug test.

"It is just for the youths to prepare themselves if they need better. They have to know that they have to stop the smoking because the weed is not worth it when it comes to a job. Not everyone can smoke a spliff and operate a machine the way the people in the workspace want them to," said Bello, as he accepted the right of employers to not employ ganja smokers even though possession of a small quantity of weed has been decriminalised.

For Simoriea Marks, a case management officer with the CSPJ, it is painful to see qualified young people in inner-city Jamaica fail to land jobs because of ganja.

"Most of the youths that I work with in the community (Parade Gardens, central Kingston) are avid smokers or users of drugs and it becomes a very difficult task, because even though some of them want to change, they will tell you that based on what is happening to them they use it to relax and to keep calm and focused," said Marks.

"Some of them also say they use it as part of their religious rituals, and as such they don't see it as a problem," added Marks.

She said in recent times young persons who have gone on job interviews have returned to the community to warn others that they will not be employed if they fail the drug test, and since then some youngsters have indicated that they want to engage in drug-treatment programmes.

"So in my talks I have always told them about the risks of ganja smoking, but because of recent activities you now have some saying, 'it's not just talk Ms Marks a talk', it is really a fact and it has far-reaching implications," said Marks.