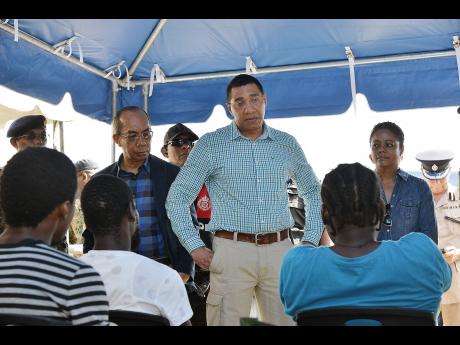 Detainees in one of the three states of emergency (SOE) now in place across the island yesterday had mixed reactions to a visit to the facility by Prime Minister Andrew Holness and a government team.

Throughout the tour, Holness reiterated that his administration would not tolerate human-rights violations as part of its crime-fighting strategy.

"This is not just an exercise in crime-fighting. This is an exercise in the restoration of the pride and dignity and respect of the security forces," said Holness.

"For too long it has been the case where people feel that they will take their chances with criminals. We have to change that. They must begin to see the police as their defenders, their heroes and protectors," added Holness.

But even as the prime minister underscored a zero-tolerance approach to human-rights violations to welcoming nods from some detainees at the Denham Town facility, others fumed, claiming they are picked up by the members of security forces despite proof that they had already been detained, processed and released without charge.

"This is the third time they are detaining me. The third time! And this morning when I showed them the paper that I have been detained they still told me to go up in the jeep," said one detainee, who remained stone-faced during Holness' visit.

He was one of 15 persons taken in to the Denham Town facility yesterday morning while The Sunday Gleaner's team was at the facility.

We were told that the detainees would undergo a five-stage screening process, including criminal background checks, in a process which could take several hours.