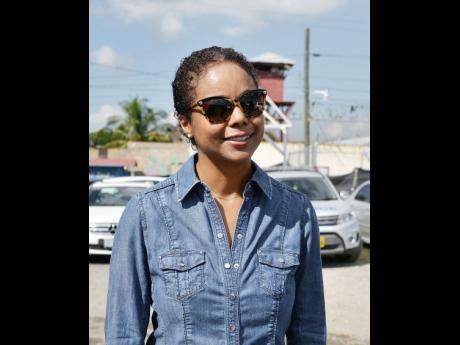 Kenyon Hemans
Attorney General Marlene Malahoo Forte taking time out during a tour of the Metcalfe Street Detention Center yesterday to speak with The Sunday Gleaner about the court's ruling on Symbiote.

The Supreme Court has cleared the way for the Government to revoke the telecommunications licence granted to Symbiote Investments Limited, which traded as Caricel Jamaica.

In its ruling handed down last Friday, the court also rejected an application from lawyers representing Symbiote to appeal its ruling.

In confirming the court's decision, Attorney General Marlene Malahoo Forte yesterday told The Sunday Gleaner that the Government will now move to complete the process, which was initiated based on a recommendation from the Office of Utilities Regulation (OUR).

"The process had commenced for the revocation of the licences of Symbiote under the Telecommunications Act, and they made an application for leave to appeal. The leave was denied.

"There was a stay of execution of continuing the process of revocation, and that has been lifted. So what will happen in very short order is a completion of the process for revocation of the licences," said Malahoo Forte.

"There were a number of issues regarding the fitness and propriety of the licensee, many questions regarding what was disclosed, and the accuracy of the information.

"There is a whole process under the Telecommunications Act which deals with due diligence and fitness and qualifications of persons to hold telecommunications licences. Information provided was discrepant and inconsistent and sometimes unverifiable. There were a number of issues," added Malahoo Forte.

The process to revoke the telecommunications licence was initiated by then Minister of Science, Energy and Technology Andrew Wheatley after he received the recommendation from the OUR.

Licence conditions were not met

Last March, Wheatley told Parliament that Symbiote had not complied with all the conditions that were attached to its domestic mobile spectrum licence, with the issues including its failure to address the matter of outstanding fees.

In 2016, the Andrew Holness-led administration decided to proceed with the granting of cellular licence to Symbiote despite a recommendation from the contractor general not to do so.

Holness defended the decision at the time as he argued that the previous People's National Party Cabinet had conditionally approved the licence just over a week before the 2016 general election.

"We took the contractor general's recommendation very seriously and we reviewed what he said, but then we had to balance against what would be our legal exposure, having all of what was done by the previous government," Holness argued at the time.

But some of Jamaica's international partners, believed to be the United States, Canada and Britain, were reportedly seemingly adamant that with its then ownership, the company was not fit and proper to operate in the telecommunications sector.

This led to a review of the conditions which led to the granting of the licence, which culminated with the OUR's recommendation that it should be revoked.