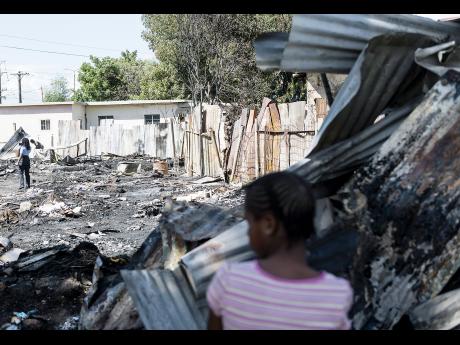 Gladstone Taylor
A child surveying the devastation of the premises she called home in Cockburn Gardens yesterday. 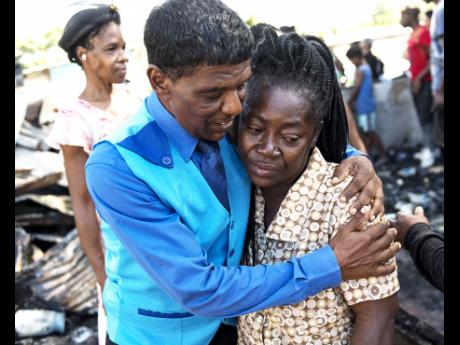 Gladstone Taylor
Ray Singh comforts his church sister, Jennifer Bailey, a victim of a fire which gutted a yard with 25 houses and left more than 40 residents homeless in Cockburn Gardens yesterday.
1
2

While most Jamaicans are preparing for the usual festivities which surround the Christmas period, more than 40 residents of premises on Fifth Street in Cockburn Gardens, St Andrew, are now homeless and trying to figure out their next move.

Among the victims is Pamela Allen, who lived in the premises in the area better known as 'Bell Rock' with her three children, two brothers, one grandchild and nephew.

"We lose everything. I am a higgler and I had a box with underpants, merinos and other stuff for sale, and everything gone. My daughter's bar, which was built in August and fully stocked with liquor, was destroyed. Everything gone," said Allen, as she sat with other victims yesterday morning at the corner of the street staring at the zinc pile at the entrance of what was their homes.

Thick, black soot is all that remains following the destructive inferno, which has left children without clothes, schoolbooks, and dampened spirits days before Christmas.

According to reports, shouts of 'Fire! Fire!' were heard around  3:05 a.m. yesterday, followed by crying, cursing adults and screaming children.

Soon after, a heavy veil of thick, dark smoke blanketed the skies, while a massive orange fire began to engulf the more than 20 board dwellings on the premises.

This marked the third time since 1995 that houses at the premises were being burnt to the ground, and like in the two previous occasions, the cause of the fire is unknown.

One resident, Jennifer Bailey, has survived all three fires and was obviously feeling the strain as she spoke with The Sunday Gleaner.

"This is my third time being burnt out and I have been trying to seek a permanent house. I have gone as far as filling out the forms with National Housing Trust to see if I qualify for something in any new development. And sadly, I am burnt out again," said Bailey.

In their gloom yesterday, Bailey and other affected residents took time out to say thanks to a quick-thinking neighbour, who they said helped to save several lives, and the few belongings some were able to save.

"When the firemen got here I had to open my gate to allow them accesses though my yard. I don't know why they were not able to access the compound from the other side (Fifth Street)," said Leonard Thomas, who is being hailed as a hero by the residents.

"I can recall a similar fire in 2008. They were able to escape through my yard, and it has happened again," he said.

"All I know [Prime Minister] Andrew Holness have nuff money fi spend this Christmas," said one woman as she examined the damage.

Holness, who is the member of parliament for the area, visited the scene yesterday and expressed his sympathy for the victims.

He underscored that it was a tragic situation, with the police still trying to determine the cause of the blaze.

"The response has to be to give support in terms of supplies so that they can continue their lives, and assistance so that they can seek alternative shelter arrangements," said Holness, as he underscored that the housing stock in the area needs improvement.

Holness vowed to do everything in his power to assist the affected residents, particularly the children who have lost all their school supplies and are now face a challenging Christmas.

"They can rest assured that their member of parliament will do everything in his power to ensure that they enjoy their Christmas like everyone else, and in the new year we will seek a permanent solution," added Holness.