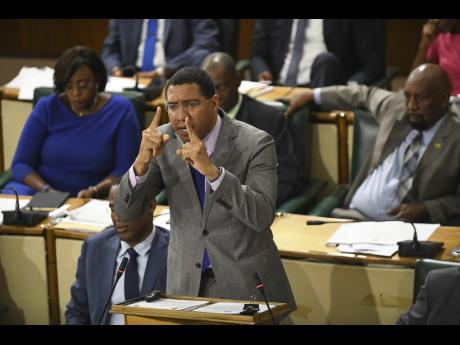 Ricardo Makyn
Prime Minister Andrew Holness on his feet during the debate on the extension of the states of emergency in Parliament last Tuesday.

Prime Minister Andrew Holness has vowed that the Government will use the security forces to ensure that the fight against crime, which has led to a 21 per cent decline in murders since the start of the year, will continue into the new year when the three states of emergency (SOEs) come to an end.

But Holness is adamant that the job will be much harder because of the decision of the Opposition People's National Party not to support any further extensions of the SOEs.

"The commitment of the Government of Jamaica, which includes the police and the military, is that we will do everything in our power to keep Jamaicans safe. We cannot, and will not, abdicate our duties. Our job has been made that much harder but I want to assure Jamaicans that we will continue to do our best," Holness told The Sunday Gleaner yesterday.

Following the vote by PNP members of parliament against the extension of the SOEs last Tuesday, Opposition Leader Dr Peter Phillips argued that despite the political risks, the Opposition had to do "the right thing, the lawful thing, the constitutionally approved thing".

Phillips further argued that the State could continue the stepped-up operations without the special measures in place.

"There is a general misconception, an illusion, that the ending of a state of emergency means that the police have to pack up all their equipment and send it back to Harman Barracks in town or Up Park Camp. It is not true. Nothing has to change," Phillips told journalists at a media briefing.

But Holness scoffed at that claim as he argued that the SOEs provide the security forces with much-needed, additional operational powers.

"The PNP is saying that everything that you do in a state of public emergency you can do without that. This is the greatest rubbish that has been uttered by any political leader in this country. It is false, it is untrue and misleading.

"If you nearly analyse the argument, we have been doing that already. We have been having presence, we have been mobilising the police. When the flare-up in crime in Montego Bay, what were we doing before? How many times did we mobilise the police, send out the military, lived in communities?

"How many foot patrols were in Flankers or in downtown Montego Bay? It was not the absence of police why we had those problems. We were already doing what the PNP is calling for now," added Holness.

According to Holness, the decision by the PNP to vote against the extension of the SOEs, despite the security forces requesting this, has sent a bad signal to criminals, particularly the masterminds who would be looking at a landscape more favourable to them rather than one where the Government and Opposition are unified in the fight against crime.

He argued that there were other options open to the Opposition rather than ending the SOEs, including discussions of the area of particular concern.

"But in my mind the real challenge was that the PNP simply did not want the continuation of the use of a very effective tool for purely narrow political reasons," charged Holness.

Christmas crushed! - Mystery fire leaves more than 40 persons, including 15 children homeless in Cockburn Gardens
‘Jamaica has lost a friend’ - Holness, Phillips react to the death of George H.W. Bush
Time for climate action, Holness tells G20 leaders
On the Corner | Stumped by the State - 'Bottom Drewsland' residents in limbo as they wait on Government for land titles
PM Holness not ready to lift Mt Salem ZOSO