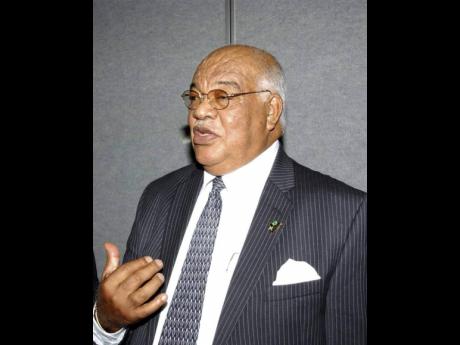 Western Jamaica lost one of its iconic residents yesterday with the passing of legendary businessman, politician, and philanthropist Owen ‘Hurry Hurry’ Sinclair.

“This is a tremendous loss to the parish and Jamaica overall,” said the Reverend Hartley Perrin, who succeeded Sinclair as the custos of Westmoreland when the latter retired in 2013. “I don’t believe anyone has had a greater impact on the life of Westmoreland … . He was a phenomenal human being.”

Sinclair was the founder of the phenomenally successful Sinclair’s Bargain Centre, popularly known as ‘Hurry Hurry’. While he was not showing any significant signs of ill health, the 86-year-old, who made his name as a retailer of low-cost, high-volume haberdashery items, began liquidating some of his land assets and buildings in 2017, saying that after 50 years in business, it was becoming quite a challenge for him.

“I can’t manage; I am 84. I need to shed some of the responsibilities and take it easy,” Sinclair said at the time.

The business empire Sinclair built began at 27 Beckford Street in Savanna-la-Mar and quickly became the location of choice for bargain hunters. Over time, he expanded his business to 16 stores, spanning eight parishes, taking the ‘Hurry Hurry’ brand to the wider Jamaica.

In addition to his astute business acumen and his penchant for community service, Sinclair was legendary across Westmoreland for his generosity as several individuals, schools, sporting organisations, and health facilities, among other entities, benefited from his kindness.

“His benevolence was beyond comparison. He was really generous, especially in his support for schools and education,” Perrin said of the former Western Westmoreland member of parliament. “He made an indelible mark on Westmoreland, and I am sure his loss will be felt across the entire parish.”

Sinclair received several major awards, but for him, the gems were probably the prestigious Order of Distinction, which he received in 1995, and the People’s National Party special award in 2013 for his years of support to the party and his contribution to nation building.

While his stoic look might have suggested otherwise, Perrin said that Sinclair was quite a jovial person and was renowned for reeling off jokes.

“He was very good at giving jokes,” said Perrin. “He always seems to have a new joke for me every time we meet. He was quite a fun person at heart.”

Yesterday, Opposition Leader Dr Peter Phillips saluted Sinclair as “a man with many ideas and influences” who loved his country.

“His heart was dedicated to inspire and uplift others,” Phillips said.

“ ... Mr Sinclair made himself available to share his knowledge and serve his communities, his party, and his country. He was a dedicated philanthropist who took joy in generosity. He committed much of his time and resources to assist the most vulnerable, support community and national programmes, and engender hope,” Phillips added.

“In the PNP, we will miss his insightful comments and his generosity as we journeyed across Jamaica building our beloved nation.”