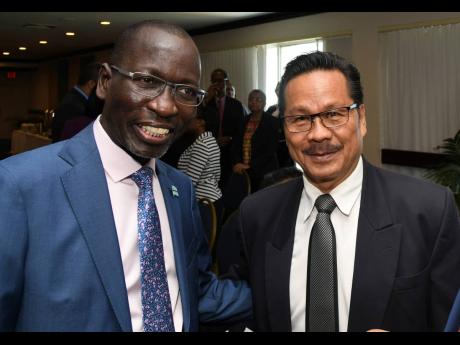 Rudolph Brown
Collen Kelapile (left), Botswana ambassador to Jamaica, and Alfred Palembangan, Indonesian high commissioner, attending the meeting of diplomatic heads at the Ministry of Foreign Affairs and Foreign Trade. The event was held at The Jamaica Pegasus in New Kingston yesterday.

Revitalising the plethora of bilateral arrangements between Jamaica and Botswana will be the main focus of that country’s new ambassador, Collen Kelapile, who also hinted at leveraging his country’s know-how in the area of mining. This may include investment in the mining of Jamaican gypsum once talks have taken place and are signed off on.

“My areas of emphasis really are to make sure we implement what’s already been agreed to. We also are going to try to propose some additional supplementary sector-specific memoranda of understanding,” he said.

Botswana is the world leader in terms of value in the mining of diamonds, and the ambassador noted Jamaica’s own rich mining legacy in bauxite.

Kelapile was among several diplomats gathered in Kingston in celebration of Diplomatic Week from Tuesday, March 12, to Friday, March 15, under the theme ‘Building Stronger Partnerships for Sustainable Development’.

Stressing the importance of cooperation, Kelapile said that middle-income countries such as Botswana and Jamaica need to reset arrangements to further strengthen their respective economies to compete on the global stage.

Both countries consummated diplomatic ties in 1982 and since then, the link between the two, although not as strong as it should be, is likely to get stronger, according to Kelapile.

Botswana has a population of just about 2.4 million people, a shade less than Jamaica’s official population of approximately 2.8 million. Both are middle-income countries and are vulnerable to climate change.

Jamaica’s Foreign Affairs and Foreign Trade Minister Kamina Johnson Smith lauded the strong support received by Jamaica through its ties with the various countries, which she said have helped to bring Jamaica closer to achieving its Sustainable Development Goals.

Speaking at yesterday’s function at The Jamaica Pegasus in Kingston, Johnson Smith said that much of the advancement in Jamaica’s domestic goals has been achieved through bridges built with partner countries.

“Many of those bilateral engagements have also been pursued within the multilateral framework as we recognise that common values and goals play a major role in shaping bilateral, regional, and international decision-making, which, in turn, impacts the lives of people across the world,” said Johnson Smith.