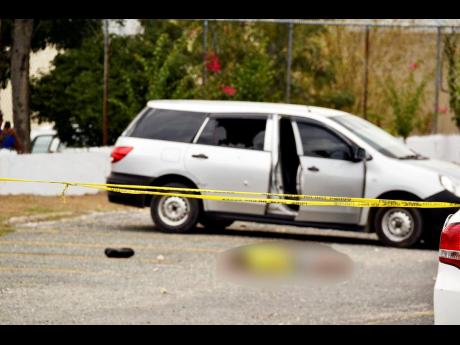 Errol Crosby
The body of one of the shooting victims lies in front of a car in the parking lot near Knutsford Express in New Kingston. 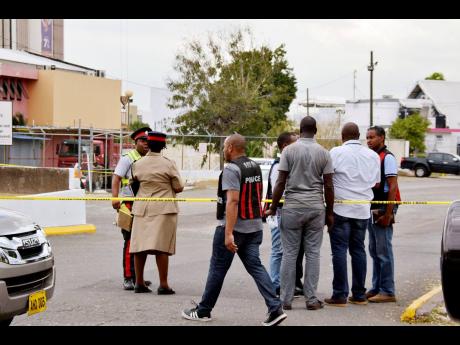 Errol Crosby
Police block access via Grenada Crescent to the parking lot near Knutsford Express’ parking lot, which was the scene of a shooting incident yesterday afternoon. One man was killed and another shot and injured.
1
2

A hail of bullets shattered the early afternoon peace in New Kingston yesterday, leaving one man dead and another rushed to the Kingston Public Hospital (KPH) when gunmen on a motorcycle opened fire on a car in the parking lot near Knutsford Express, beside the New Kingston Shopping Centre.

The shooting, which occurred around 2:45, sent persons in the vicinity scampering, while onlookers peered from behind walls of businesses as the heavy security team in the area placed caution tape as far as 70 metres away from the murder scene.

Passengers seeking to access the services of the popular ground transportation company were forced to do so from Dominica Drive.

When The Sunday Gleaner reached the scene about 3 p.m., the body of the victim was still on the ground and the neon-green shirt he was wearing was soaked in blood in the stomach region. The victim wore grey shorts, and a shoe lay near the body.

Reports reaching The Sunday Gleaner are that the two men were sitting in the motor car when they were attacked by two men on a motorcycle who entered from the Grenada Crescent access.

Police on the scene could not say if the murdered man was the owner of the car, and it could not be ascertained if he was in the driver’s or passenger seat. However, the right front door of the car was open, and the dead man’s body was on the ground nearby, suggesting that an attempt was made to run from the attackers. At least one window was shattered.

Tight-lipped police investigators also said that many leads were being followed, including possible links to the apparent purging of former members of the British Link Up Crew, who lost two of their top men in two months, with one gunned down last week.

Police also say that the silver- and black-coloured vehicle – popularly used in the taxi industry – was from “across the Waters”, suggesting a Portmore connection.

Technology is expected to play a lead role in identifying the perpetrators.